New ‘Belfast Bikes’ to be installed directly into the River Lagan 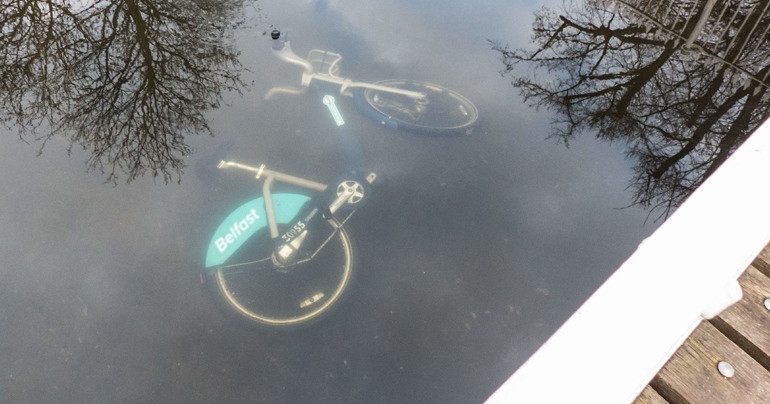 Following a spate of vandalism just hours after the official launch of ‘Belfast Bikes’, Belfast City Council this evening announced a ‘brilliant new money saving plan’ for the scheme, which will see most of the new ‘Public Bikes’ installed directly to the bottom of the River Lagan.

“We are constantly looking at ways to be more cost effective in these harsh economic times” said Pastie Mackenzie from Belfast City Council. “and after much analysis of the costs involved in maintaining and replacing this bicycle network around the city, we felt that the most effective way to run the scheme was to distribute the bikes directly to where they will be most utilised.”

It is thus understood that 40% of the bikes will now be bucked straight into the Lagan at scenic riverside locations, whilst a further 35% will be given directly to spides to cycle around housing estates, to do wheelies on, fight over and leave lying at their arse in overgrown backyards, gathering rust and providing much needed shelter for homeless earwigs.

Of the remaining bikes, 10% will actually be parked sporadically at bike kiosks around the city, in a bid to fool tourists that the scheme is immensely popular. The final 20% are understood to be destined for storage – and will be used to re-supply spides when their bike stocks run low.

The move has been welcomed by both the PSNI and the Ulster Construction Federation, who say that the scheme will save ‘millions’ in bricks, scaffolding and public transport repairs, as spides will simply ride the new bikes to future riots – before dismantling them to buck them at the cops. “It’s a win/win for both the economy and the environment!” said officer Helmut Weisser of the PSNI’s Riot Response Team.

However the new scheme has been heavily criticised by retailer Dunnes Stores, who claim that the Lagan’s scrap metal supply is in ‘good hands already’, after a consortium of spides from the Ormeau Embankment won the official contract to randomly dispose of their shopping trollies in the river several years ago.