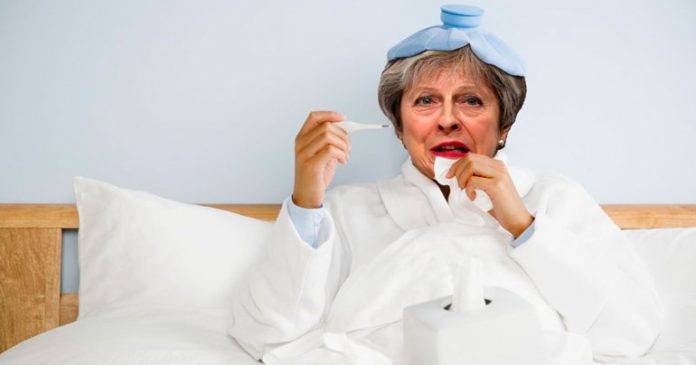 UK politics looks set for further disarray after Prime Minister Theresa May decided to phone in to her line manager, the Queen, and tell her that she isn’t feeling great and will be off for ”at least a couple of days’.

However a source close to Mrs May told The Ulster Fry that Mrs May is planning on going long term sick until after Christmas at least. According to her husband Brian, the Prime Minister has been given a two week line by her doctor, and this is likely to be extended.

“Theresa’s been under a lot of stress,” he told us. “She’s getting a lot of grief from her team, and is beginning to think that other folk in the office are talking about her behind her back. She told me that there’s some girl called Arlene who was letting on to be her friend then slagging her off in the kitchen.”

“Basically she’s decided she can’t be arsed so is going the Queen and put on a really croaky voice.”

The revelation has caused a constitutional crisis, as there is currently no Deputy Prime Minister and none of her cabinet is willing to fill in for her while she’s off.

An email has been sent around Parliament to see if anyone wants to step up, but the only replies came from Boris Johnson, Sammy Wilson and Larry the Downing Street cat.

It’s is understood that the Queen has considered these options carefully, and will appoint Larry as soon as they can find a cat box to bring him round to Buckingham Palace.