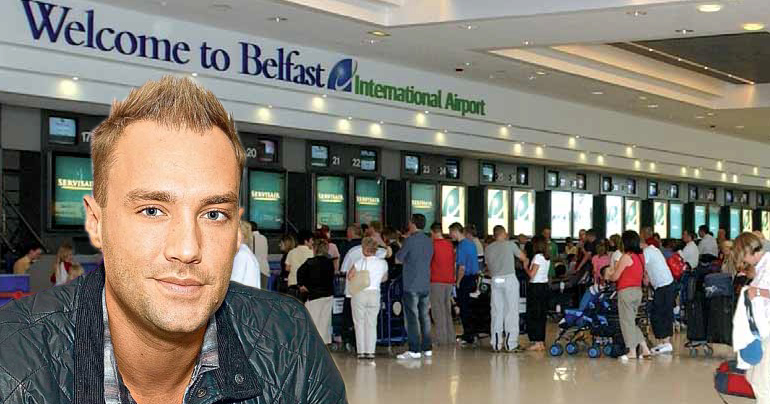 The directors of Belfast International Airport have hit on an audacious plan to upstage their City rivals by re-launching under an exciting new brand. “It’s a difficult market out there,” said Head of Marketing Andrew Crampon, “so we need a name for the airport that will make us stand out from the competition.”

“City Airport stole a march on us by adding ‘George Best’ to its name a few years ago, but now, we’re going to go one better. From Easter our site will be rebranded as the “Calum Best International Airport” – a name reflecting the quality and service that people can expect at our facility.”

Accordingly, the airport will undergo a makeover to ensure that visitors will get the full Calum Best experience. Travellers will be thoroughly frisked by burly, bearded bouncers in a Celebrity Love Island themed security zone, the queue of which can be completely bypassed by knowing the manager. The new airport bar will also be remodelled on a top London nightclub to fit with Calum’s high class image. Patrons will be able to queue for a range of overpriced drinks whilst gazing jealously into an adjacent VIP area, where better heeled travellers can avail of a premium table service, lit by candles scented with the aroma of Calum’s aftershave range.

“The name is perfect for us,” said Mr Crampon, “we’re not exactly A-listers in the world of airports, and even though we’re based outside Antrim we’ve been trading off the name of a more famous city for years. “

It is understood that the City of Derry Airport is planning a similar change. “Themuns in Belfast think they have everything,” said Operations Director and Chief Car Park Attendant Sean Docherty.

“From now on we’re going to be called the Nadine Coyle International Space Station. Stick that one up your arse, Belfast.”