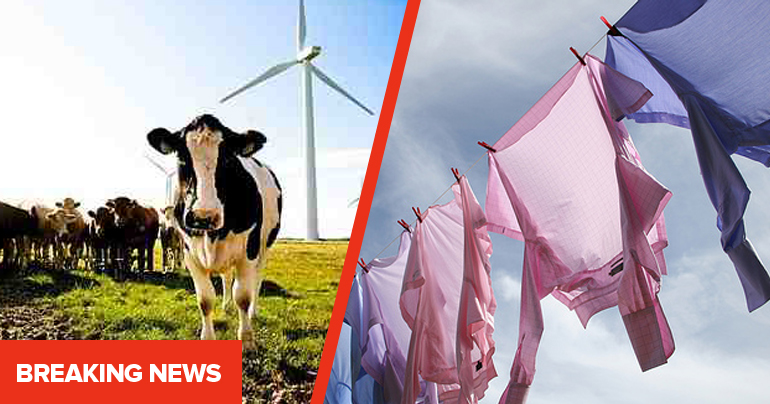 Mammies across Tyrone were distraught this morning, after one of the county’s main wind turbines collapsed suddenly, leaving many homes in the area without sufficient wind to dry clothes.

The turbine, which was standing on Murley mountain near Fintona, came crashing down late on Friday night, scattering dangerous debris into neighbouring fields and causing over £500,000 in damage. Tyrone has been forced to generate wind at its own expense in recent years, following HBO’s building of the Great Northern Wall set for Game Of Thrones at the foot of the Sperrins. This has caused wind in the region to drop dramatically.

The crisis has hit Tyrone at the worst possible time, with thousands of school uniforms needing dried tonight, as kids across the country return to school tomorrow after the Christmas break.

Trillick farmer Barney McElvey told us about the early relief effort. “We rigged up a clothes line out of bailer twine behind a lock of cattle, and tried to direct their arses at a clatter of the wean’s jumpers. They dried all right, but ended up so clabbered in shite that no amount of Lenor would cover the smell.” As a result of this initial failure it is understood that several families in the area have rallied together to set up a Tumble Dryer Relief Centre in the community hall in Fintona.

West Tyrone Sinn Fein MLA Barry McElduff has described the disaster as being ‘of Biblical proportions’. “It’s like something you’d read about in the Old Testament,” he told us, “if they had wind turbines in the Bible, or school jumpers.”