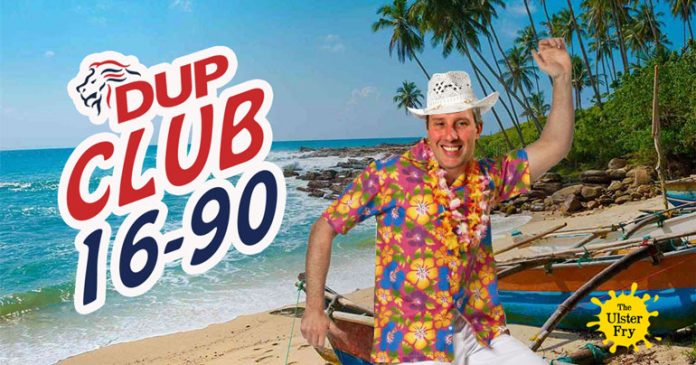 In a shock development unrelated to anything in the news, it has emerged that the DUP has plans to launch its own travel agency.

“Club 16-90 will offer attractive holidays whatever your budget, so long as that budget is absolutely humongous and probably paid by someone else,” said the DUP’s Travel and Tourism spokesman Thomas Crook. “We’ll have loads of exotic destinations, including the Caribbean, Dubai, Larne and Ballymena.”

There will be some limitations and exclusions to keep the service in line with the party’s ideals.

“There’ll be no flights on a Sunday,” says Crook. “All the planes will be chained up at the airport.”

“Likewise, in July the only destinations available will be towns hosting the Twelfth.”

“And you needn’t expect any of those dirty holiday romances either,” he continued. “It’ll be sun, sand, sea and slacks, as everyone will have to keep their trousers on at all times.”

Mr Crook has one last word of advice for any potential customers who might want to blow their RHI money.

“When you get to customs, or are meeting with the Parliamentary Standards Authority, and they ask if you have anything to declare, it’s important to remember to say ‘Only my undying devotion to the Queen’,” he told us.

“Otherwise it could get messy.”