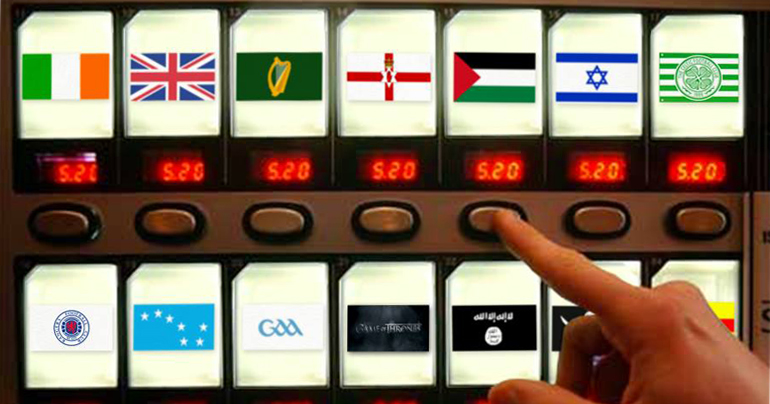 With the elections looming and the marching season just around the corner, one Belfast pub has struck upon an ingenious way to make money from Northern Ireland’s honest, hard-working sectarians – by installing the world’s first Fleg Machine.

For the first time ever, drunken city centre revellers can now get off their face whilst simultaneously getting into other peoples faces, simply by dispensing their fleg of choice from Northern Ireland’s newest vending-machine innovation – FlegOMatic.

Priced at a reasonable £5.20, bar manager Albie Grand told us “With this new machine we are finally able to offer our customers what they really want – at an affordable price. Sure people come in here to buy beer, cocktails and all that shite, but once they’ve a couple of drinks in them, you know the craic – everyone starts gasping for a Fleg!”

“We offer our customers a wide variety of flegs to suit a range of tastes and occasions.”

Concerned with the heath risks of flowing flegs in other peoples faces indoors however, Health Minister Jim Wells took a break from insulting Gay folk to insist that the bar install a special outside flegging area – where people can go and enjoy a fleg in the fresh air.

“Aye, I think it’s a really good idea” said customer, Lambeg Johnston. “I bought myself a new Norn Iron fleg there. Its nice to come out here and flow it into the night air in peace.”

However not everyone was so positive. “I tapped a spare fleg off someone earlier, but it was revolting” admitted Dissident O’Hagan “I was pure dying for a fleg like, but when I put it up, I realised it was a feckin Union jack. Boke!”

Whilst management admitted some minor riots had already broken out in the area, they have now installed signs warning customers ‘not to tap flegs’, whilst reminding patrons of the dangers that second-hand flegs can cause.

As we left, we spoke to one lopsided customer who told us he was still ‘sussing out’ the new fleg machine. “I’ve put about £100 quid into the bastard so far and it still hasn’t paid out” said Danny Accumulator.

“I’m just waiting on three of a kind!” he added, before ordering another pint of Aftershock.