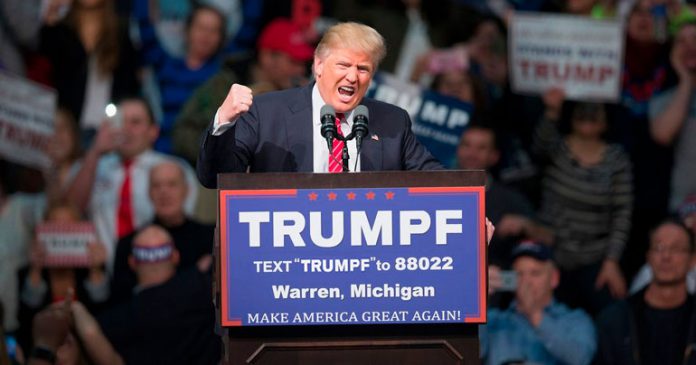 Researchers have revealed that nearly all over 65s in Northern Ireland routinely add an ‘F’ to the end of US President Donald Trump’s name.

“We first noticed this phenomenon two years ago, when one of my colleagues arrived for work on his 65th birthday,” says Roger Thesaurus, Professor of Norn Iron Studies at Strangford University.

“The previous day he’d been discussing US politics with the rest of us and had no difficulties with pronunciation, but that morning he arrived in the office and announced, “Did ye see that Tweet from that eejit Trumpf last night?”. It was an astonishing transformation.”

“This is entirely true,” revealed the colleague in question, Dr Dick Chonery. “I’d also lost the ability to pronounce certain other, random words.”

“Basically my worst nightmare would be that if for some reason I had to say that Donald Trumpf had a meal, then ordered a Pavalova for dessert, washed down with either a glass of Prasseca or an Expresso.”

“It’d be even worst if he then got a headache and had to take Iburo… Ibpro… Broofin.”

As a result of the research, not being able to say Trump will be added to the list of things that Northern Irish pensioners can’t do, which includes using cash machines, changing their mobile phone ring tone and avoid shouting over everyone during video calls.

In a late development on the story, Billy’s da has refused to comment on allegations the entire study was based on him, as he was too busy shouting at someone on the phone about the various punishments he wanted to inflict on Donald Trumpf.