Adams set to deny ever being Sinn Féin President 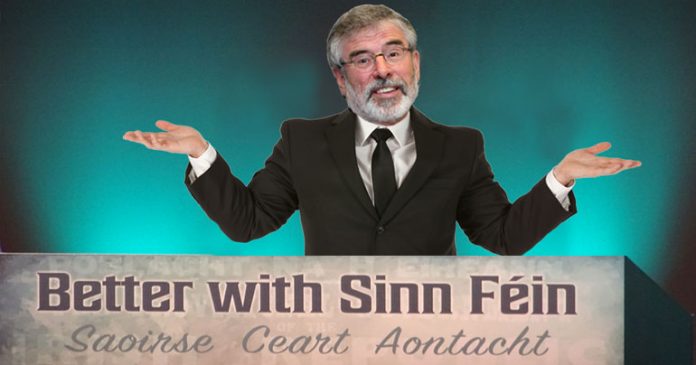 Sinn Féin President Gerry Adams has told supporters that he intends to set a date when he’ll be able to deny ever having their support.

“We have a 10 year plan,” he told a party gathering this morning. “By the time it’s finished I’ll be able to deny ever existing at all, a bit like unicorns and mermaids.”

The Ulster Fry has gained access to the document and can exclusively reveal Mr Adams’s schedule of denial.

Nov 2017: Gerry announces a date when he intends to stand down as Sinn Féin President, but later that evening denies making the announcement.

Dec 2017: He posts on Twitter denying that he ever denied the announcement.

January 2018: Gerry reveals that Mary Lou McDonald will replace him as President of the thing he was never President of, after a democratic vote taken at a meeting he didn’t attend.

February 2018: Gerry is unable to recognise pictures of Mary Lou McDonald but names Conor Murphy as someone he met once on holiday.

May 2018: During an interview in the Diary Room of Celebrity Big Brother, Gerry refuses to admit discussing nominations with Hollyoaks star Jorgie Porter.

August 2019: Gerry claims that when he said Border Poll he was referring to the need for a Broader Pole, as he was concerned that a pillar in his living room wasn’t strong enough to support the lintel above.

September 2019: He finally stands down as President of Sinn Fein, and publishes an autobiography detailing his life as leader of the Democratic Unionist Party.

November 2019: Gerry denies knowing who Gerry Adams is during an appearance on a documentary about himself.