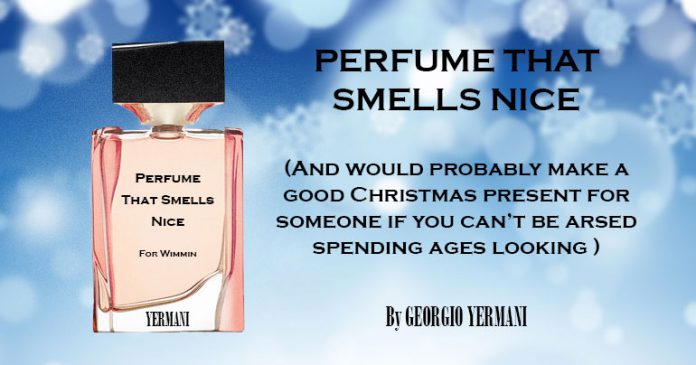 Cosmetics companies across the globe have been shaken to their foundations after a new perfume broke with centuries old tradition and made an advert that isn’t completely mental.

The ad for “Perfume that smells nice” by Georgio Yermani features a middle aged woman receiving a bottle of the perfume from her husband on Christmas morning, then telling him that it does, indeed, smell nice.

“I mean, what the f**k was all that about,” commented advertising executive Pat O’Ruban, as he put his boot through his television.

“Perfume and aftershave adverts are meant to be completely random – with mad looking women roaming about in fields muttering about daisies, or actors with dubious personal lives wandering around deserts with wolves.

“This new nonsense just tells us that it smells nice, where’s the scenes with Keira Knightly on a motorbike, the wrestling French sailors or yer man from Deadpool jumping off a building?”

Sporadic rioting has since broken out in branches of Boots across the country, as confused shoppers vent their anger by converting bottles of aftershave into makeshift petrol bombs before setting fire to cosmetics counters.

“This perfume related rioting is likely to impact on our sales this Christmas,” admitted a Boots spokesman, “But at least the flames smell nice.”