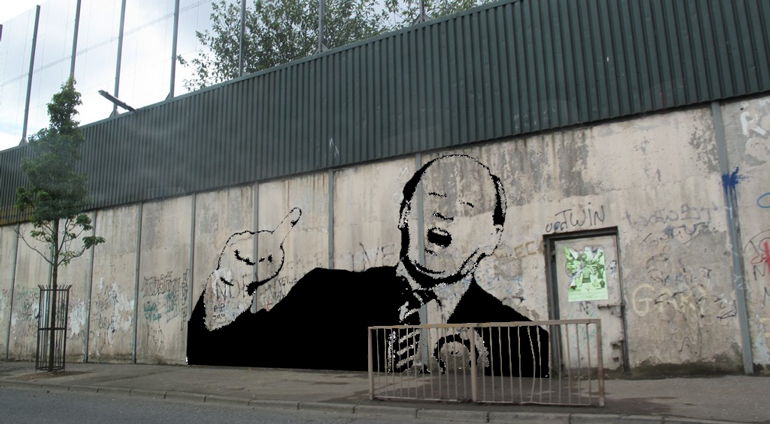 Controversial street artist Banksy appears to have waded into Northern Irish politics after one of his murals appeared on a “peace wall” in North Belfast this morning.

Surprisingly it seems that the guerilla artist has thrown his weight behind Jim Allister, as his latest work shows the outspoken TUV leader in a characteristic pose.

According to our source close to Mr Banksy, he has been following developments here for some time and has particularly enjoyed Mr Allister’s TV appearances. “He loves the way Jim gets really, really angry about stuff,” we were told, “particularly when he argues with Gregory Campbell on the Nolan Show.”

We understand that there is much debate in Belfast City Hall about how to deal with the new artwork. “It might be worth millions,” says the council’s director of Walls and Footpaths, Muriel Painter, “but at the same time it wouldn’t be right for us to allow political symbols to be painted on public property.”

“We’ll probably end up dismantling it brick by brick, and rebuilding it somewhere we can make some money out of it.”

This is not the first time that a controversial artist has found inspiration in Northern Irish politics. In 2003 Damien Hirst submerged a horse’s arse in formaldehyde in a bizarre tribute to Sinn Fein’s Barry McElduff.  Tracey Emin is also believed to have had Stormont in mind when she exhibited her unmade bed complete with stains and discarded underwear in 1998.

We asked Mr Allister himself for a comment on the new artwork but he replied “No”.