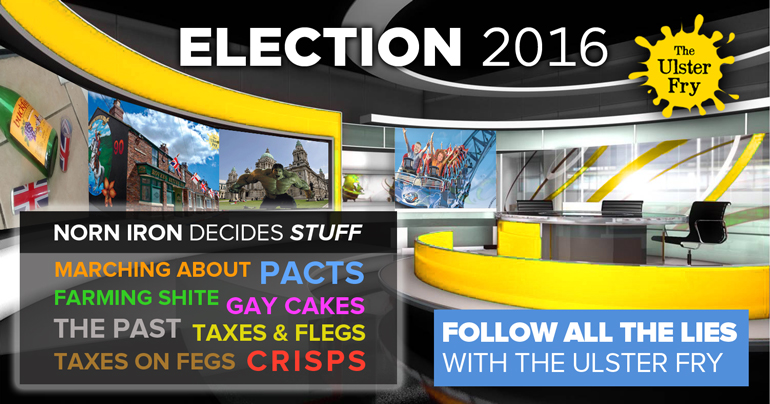 Part two of our in-depth, cut out and keep guide to the political parties of Northern Ireland. For the Alliance, Conservatives, DUP, Greens and the independents, click here for part one. (After you’ve read this, obviously, unless you’ve already read part one, but you know what we mean).

The SDLP has the longest name of any Northern Irish party. Like Sinn Fein it wants a United Ireland, but unlike Sinn Fein, it didn’t hang around with folk that blew stuff up in order to get it.

After Sinn Fein stopped liking people who blow stuff up, it took over from the SDLP as the biggest Nationalist party, and now no one is very sure what the SDLP is for. Mostly it seems to be some kind of home for retired folk and people called Attwood and Durkan. It is now led by Clint Eastwood.

Sinn Fein is kind of linked to the IRA, although its leader Gerry Adams was never in it or anything. It wants a United Ireland, which it hopes to bring about by pissing off the Unionists so much that they’ll all leave. It also likes to promote the Irish language, mainly by encouraging its representatives to speak it badly in Stormont.

Other policies include abolishing the bedroom tax, then changing their mind about it, then changing it back. This is because so many of its members spent time in special, secure, one bedroom apartments during the 1970s and 80s.

In the world of the TUV a traditional unionist voice is a very, very angry voice. Its leader Jim Allister left the DUP because its voice wasn’t angry enough, and its main policy is being opposed to everything. It is probably in favour of some stuff too, but it is generally so angry about stuff it is opposed to that it forgets to tell people of its ideas for the economy and such like.

Led by Jeremy Clarkson, the UK Independence Party wants the UK to leave Europe and immigrants to leave the UK. It also wants Northern Ireland to stay in the UK, although England might leave it. This means if Scotland also leaves, the UK would be made up of Northern Ireland and Wales, not in Europe – or something like that.

The Ulster Fry Party is the best of all the political parties. You can find out more about it here.

The UUP is the oldest of Northern Ireland’s political parties. It used to be the biggest in the country, but fell out with itself. It is presently led by former newsreader Jimmy Nesbitt, who has decided that the best way to make his party strong again is to do everything that the DUP tells it to. Its policies are probably the same as the DUP’s, but no one is quite sure any more.

Hopefully that’ll help you choose. If it doesn’t, remember that the Ulster Fry will be bringing you unrivalled* election coverage throughout the campaign, so follow our posts and we’ll tell you more stuff.

*The small print: by unrivalled, we don’t actually mean unrivalled. We mean made up.