BBC’s Mark Sidebottom does NOT have a side bottom, reveal scientists 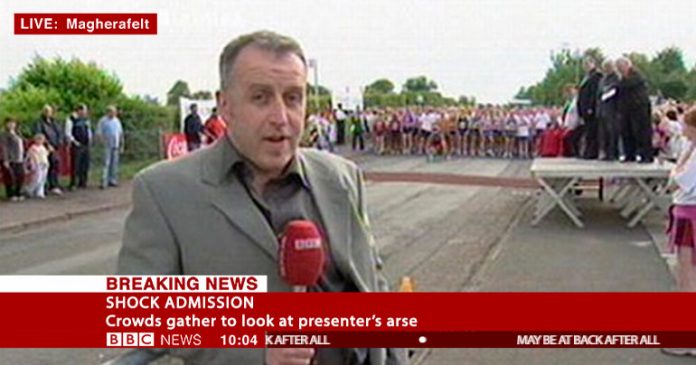 BBC sports pundit Mark Sidebottom’s bottom is in the same place as everyone else’s bottom, an investigative study by top scientists has revealed.

“We’ve been looking into Mr Sidebottom’s bottom for several months,” says leading biologist Anil Kavity, “and we’ve concluded that although it can be viewed from the side, it is actually positioned to the rear. It does, however, have a mark on it, so at least that part of his name is true.”

The revelation will stun BBC bosses, who’ve been promoting the presenter’s side exit for several years and now find themselves accused spreading fake news.

“There’s a really poisonous atmosphere in the BBC canteen now, thanks to Mark’s bottom,” says newsreader Donna Traynor. “No one knows who to trust. Some people are standing behind Mark, but others think he’s let the side down.”

It remains to be seen whether the revelation will force 48-year-old Sidebottom, 52, to change his name to Backbottom.

“Mark’s content to sit tight on this one,” says a BBC insider.

We considered contacting Mr Sidebottom for comment but then realised that he’d think we were a pair of immature dickheads.