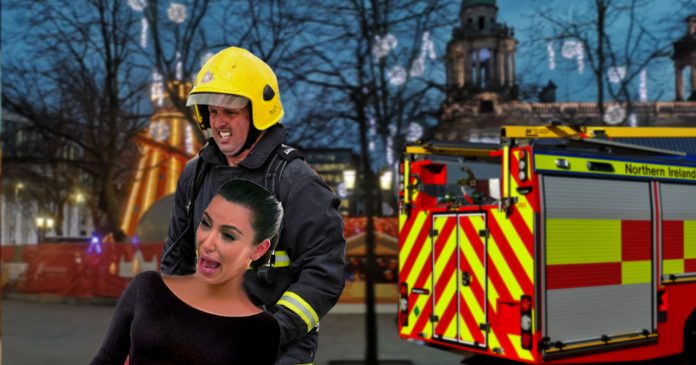 The emergency services were sensationally called to Belfast’s Christmas Market today after top celebrity Kim Kardashian got her huge arse wedged on the slide of the helter-skelter.

No fewer than four fire appliances and a coastguard helicopter were needed to extricate the star from the fairground ride, in what some experts have described as the most intricate arse related rescue operation in the history of Belfast.

The incident comes after it was revealed that the market has become a huge draw for international celebrities, with dozens flocking to the city to experience the sights, sounds and smells of the event.

“We’ve had a host of big names visiting this year already, and they’re not afraid to spend a pound or two,” says council spokesman Russell Sprout. “Just last night I bumped into George Clooney in the queue for the bogs and he’d just blown £500 at the pick ‘n mix, which to be fair only bought him a quarter pound of fudge and a macaroon.”

“I also spotted Tom Hardy, Victoria Beckham, Nicholas Cage and that guy who plays Toadie from Neighbours in the beer tent, all drinking Harp of course, as there’s an advert for it in the middle of this article.”

The organisers hope that what’s become known as the Kardashian Arse Incident won’t put stars off making the journey.

“We’ve offered Kim and her husband Jay Z or Kanye West free tickets for the new snow slide on Royal Avenue to make up for it,” says Sprout. “There’s no way she can get her arse stuck in that, it’s about 20 ft wide.”

Breaking News. Emergency services have been called to Royal Avenue where an unnamed celebrity has got her arse stuck in the snow slide.