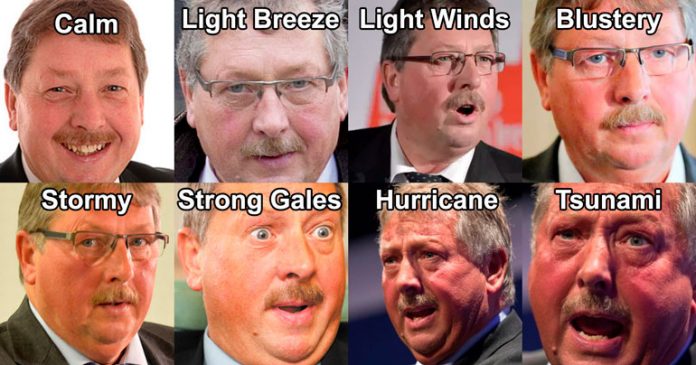 Top meteorologists have revealed a new scale of windiness based on Sammy Wilson’s face, that they hope will make it easier for people to understand the dangers posed by bad weather.

“We’ve been trying to warn people about incoming storms using basic colours like yellow, amber and red for years, but we’re not sure that the colours are subtle enough,” says glamorous weatherman Barra Best. “With this new scale you just have to stick a photo of Sammy in the corner of a weather report and you’ll get a real sense of the danger that’s coming.”

The news comes after Mr Wilson faced criticism for saying that business and farming groups were “puppets of the Northern Ireland Office” after they backed Theresa May’s plans over the Brexit Backstop, but some leading economists have supported his controversial statement.

According to the experts from Larne School of Economics, the MP’s years of experience as a school teacher and politician make him the perfect man to lecture business people about what is best for them.

“Sammy’s knowledge of the complexities of trading across international borders is second to none,” says Professor John Milton-Keynes from the University’s Department of Really Hard Sums. “He’s a real renaissance man. You just have to look at how he soaked up all the data about the environment to come up with his radical views on climate change.”

At time of going to press, Mr Wilson’s face has been described as a light orange, with warnings of gusts of red and purple blowing in from the Atlantic.