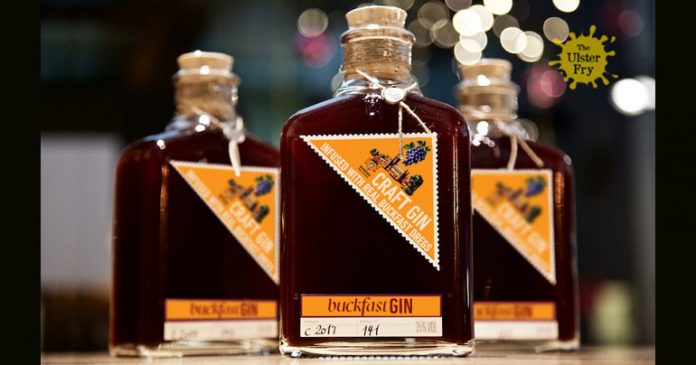 A Co. Armagh businessman has entered the fashionable world of craft spirits by launching what is thought to be the world’s first Buckfast infused gin.

Craigavon native Gerry McCash told us that he hit on the idea whilst walking his dog in Lurgan Park one Sunday morning.

“I kept finding discarded bottles of Bucky, loads with a fair slap left in them,” he explained. “I thunk to myself, that’s a wile waste of good wine, someone should gather them up and make use of the contents.”

“Then I minded that the Cathedral Quarter’s full of arseholes sipping fancy flavoured gins, and paying through the nose to do it, so I set up a distillery in my ma’s shed and hoored in all the dregs to make this stuff.”

“A truly remarkable drink, the subtle juniper flavour blends tantalisingly with the soft Buckfast undertones to produce a mellow experience, but one that is given a hard, violent edge by the ridiculously high caffeine content.”

“The drink is best enjoyed with a light ginger ale and a cube of honeycomb – Yellow Man for local authenticity, but a Crunchie with the chocolate scraped off will suffice if you’re drinking it in a park.”

However Mr McCash told us that this was “bollocks.”

“You can’t beat an old fashioned G&T, which in this case is just a couple of measures of the gin in a long glass, topped up with a whack of Tonic Wine.”

The new Buckfast Gin is only available in a small number of ridiculously trendy Belfast bars including The Riveter’s Nutsack, The Dirty Hallion and The Brazilian, priced at £12.50 for double in an old jam jar or £7 for a shot served in a cracked tea cup.