American tourists devastated to find ‘Sandy Row’ is not a beach 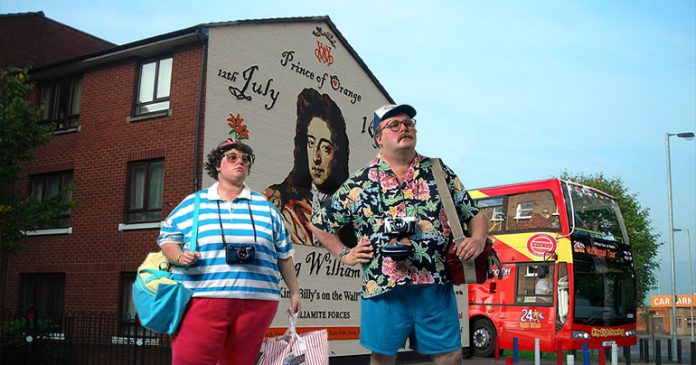 An American family holidaying in Belfast have been left shocked and confused to find that the famed ‘Sandy Row’ they’d been hearing so much about is not in fact a beach but a historically loyalist residential thoroughfare.

“We feel totally deceived,” said Hank Thunder, the family’s patriarch, “People kept telling me that this was where all the ‘Orangemen’ go and we assumed it was some sweet tanning spot, I came here to get my tan on.”

Mr. Thunder’s claims were lent credibility by the fact that he’d been strolling around the neighbourhood for several hours clutching a lilo with a pair of incredibly disappointed, sun-cream lacquered children in tow.

“It’s infuriating,” he continued, “Things are so difficult in the U.S. right now. We just needed to get a relaxing break from the horribly caustic and divisive political atmosphere, so we came to Northern Ireland.”

It is understood that this is not the first disappointment the Thunder family have suffered on their trip so far. Holywood locals report seeing a distraught looking American family walking through the area angrily complaining at the lack of celebrities to be seen, shouting “What is this nonsense? Not even Liam Neeson? They can’t even afford a second ‘L’ for their signs!”

In a related story members of a French family who booked 3 weeks in a caravan site in Larne have also expressed their disappointment, but not for any comedy mix-up reasons.

“Eet was just sheet,” they told us.