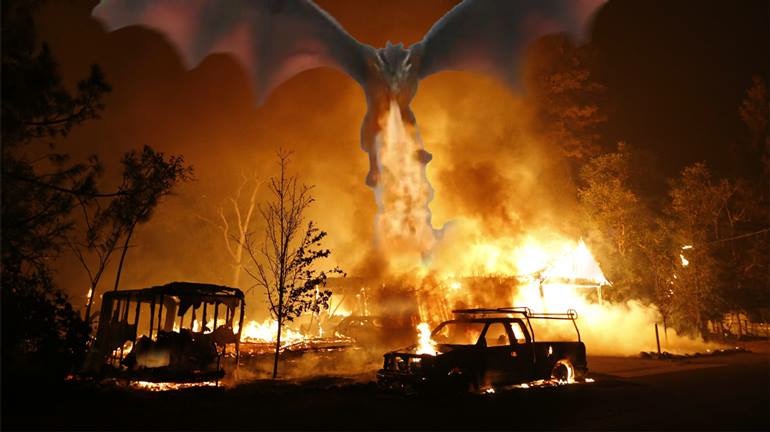 There have been demands for the Stormont administration to ban the production of Game of Thrones here after the show’s dragons accidentally burned much of a County Down village.

The Ulster Fry understands that the dragons escaped from their enclosure at the film set and caused massive disruption in the local area before setting fire to the Corbet, a small hamlet outside Banbridge.

The incident occurred at 3am this morning, when most residents were in bed. “I was sound asleep,” says local farmer Josiah Slurry, “Then I hear all this loud screeching and the animals going buck mental in the barn. I pulled on my trousers and rushed outside, it was chaos out there, even one of the cows shat itself.”

Mr Slurry’s farm was severely damaged in the blaze, and he was in doubt who was to blame. “It was them dragons,” he told us, “they’re always wrecking round here, the film boys just can’t seem to keep them in.”

The show’s producers have admitted that they’ve been having ‘a few issues with the cast.’ “We work long days,” says director Chuck Wankstein, “and at the end of a hard filming session everyone just wants to blow off steam, for the dragons that involves blowing off fire as well.”

A spokes-dragon from the animal enclosure told us that he and his colleagues were ‘deeply sorry’ about the incident. “We’d been on the lash and as usual Geoff had one too many and yacked his hoop on the way home.  Unfortunately for dragons any boking is accompanied by a massive blast of fiery breath, and the rest is history.”

We contacted the PSNI in Banbridge and asked them if they would like to comment, but they told us to “piss away aff” or they’d do us for wasting police time.