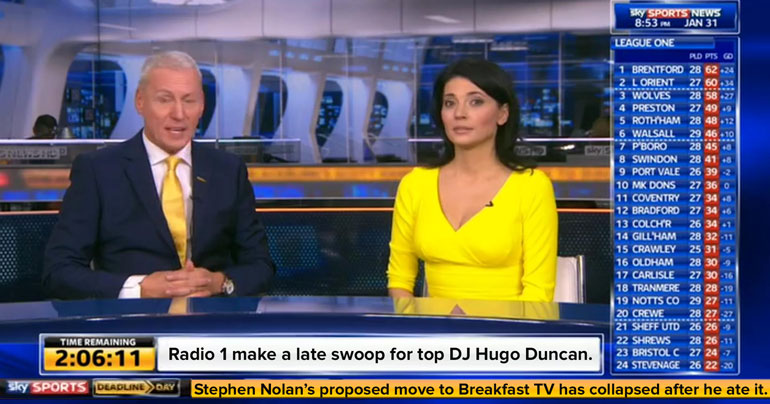 In a controversial move, the European Union has announced that all aspects of human relationships will in future be governed by the same rules as football transfers – meaning that everyone had until six o’clock this evening to sort their lives out.

Revealing the plan, EU Vice-President Jacques Balsac said that it was essential to harmonise human activity throughout the Union. “We can’t expect to reach our full potential with people changing their lives willy-nilly – moving house, splitting up with partners, changing jobs – it’s interfering with economic growth.”

The news brought a rush of activity as people desperately tried to “sort their shit out” before the transfer window slammed shut, and inevitably some confusion has arisen.

Moira Woman, a 37-year-old woman from Moira, told us that she’d been determined to exchange her husband for local star Jamie Dornan, and got Jamie Bryson instead. “Not exactly the North Down hunk I was after,” said Moira. “He was OK at first, but I soon went off him. I’ve told him my interest is flagging, but weirdly that seems to have made him even more keen…”

Elsewhere, rumours are rife that changes are afoot in the weather line-ups of both local TV stations. In a straight swap of snappily dressed heart-throbs, Barra Best has stepped aside for his namesake Calum at the BBC, while UTV’s Frank Mitchell will be replaced by Phil and Grant Mitchell on alternate weeks.

As the panicked deals spread some top footballers have found themselves caught up in the melée. England striker Wayne Rooney, for example, has gone from being the ‘main man’ at Manchester United to becoming “The Maine Man” in Ballymena, after an accidental swap deal saw him exchanged for 48-year-old lemonade delivery operative Barry Sloan.

In a similar incident, Real Madrid forward Gareth Bale is understood to be “disappointed” after a mix-up at a County Tyrone farm suppliers saw him delivered to a smallholding in Fintona. “We misread an order for blue baler twine,” says store manager John Deere, “But it seems the farmer is happy enough, now he’s got used to a multi-million-pound footballer holding up his trousers.”