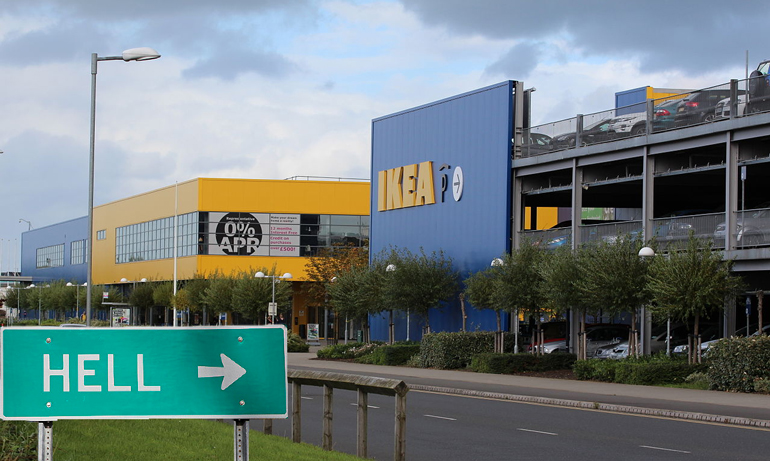 In a rare and revealing interview with the Ulster Fry, the Devil has admitted that he has created a Tenth Circle of Hell – in the form of a Bank Holiday shopping trip to IKEA.

The former Argos delivery driver told us that he’d been attempting some home improvements at his bachelor pad in the Ninth Circle district, when he stumbled upon the new form of torture. “I was doing up the bedroom when it occurred to me that I could do with some storage for my CD collection,” he said, “so I thought I’d pop down to IKEA and pick something up. Say what you like about IKEA, but they do have an impressive range of storage solutions.”

“When I got there, I ended up wandering around aimlessly for hours, and instead of just getting some CD shelving I soon found that I had a trolley full of shite I never wanted in the first place. That’s when it hit me – I could build an extension onto Hell where the truly evil could be condemned to an eternity looking for a non-existent item in IKEA on a Bank Holiday.”

“As soon as I got home I put my evil minions to work, although it took ages as it came in a flat pack from Sweden and we lost the wee hexagonal yoke you need to put it together.”

The Prince of Darkness went on to explain that he’d been making some alterations to his underworld apartment complex. “I’ve remodelled a few circles,” he told us. “The Third has been converted into an exact replica of Connswater Shopping Centre, I was inspired after finding myself trapped there on a wet Sunday in March. We’ve also knocked a wall through between the Fourth and Fifth Circles to allow us to extend the Strabane Zone to include Lifford.”

It seems that this won’t be the end of the improvements. “Work begins on the Eleventh Circle next week, provisionally named Katie Hopkins Plaza,” Satan revealed. “Hopefully it’ll be ready in time for her to perform the grand opening.”