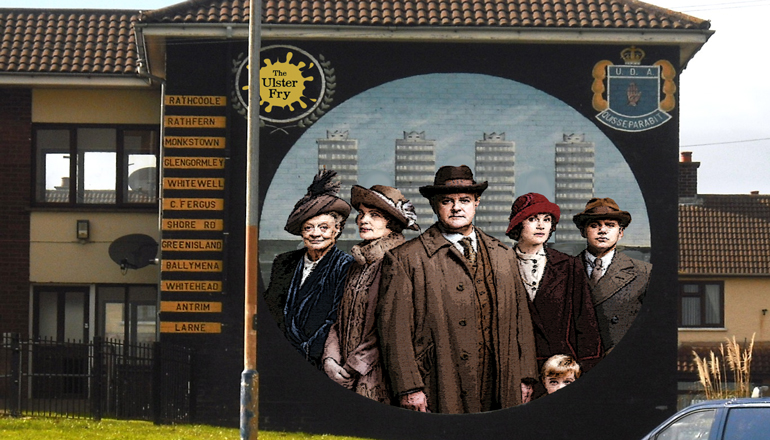 As viewers eagerly await the final episode of the popular boring TV show Downton Abbey, the Ulster Fry can exclusively reveal that the producers have torn up the costume drama rulebook by relocating the cast to Rathcoole.

In the stunning departure, the Earl of Grantham has fallen on hard times and has moved his extended family to South Antrim. Despite his fall from grace, the Earl’s natural breeding and air of superiority have ensured that he has risen to the very top in his new social circle.

“I play ‘Mad Rab’ Crawley,” says cast member Hugh Bonneville, “a local UDA Brigadier with a penchant for flowery shirts, fast cars and Tennent’s Super. The accent’s been a bit of a struggle I admit. It took a while to get from ‘yes, Ma-Ma’ to ‘aye yer ma,’ but I don’t think your local viewers will notice.”

Not all of the Earl’s family have found the transition to Rathcoole life so easy. The Dowager Countess, played by Maggie Smith, is understood to be struggling to survive on her meagre pension, and is seen eagerly awaiting her winter fuel payments.

“Lady Violet is having a hard time,” says Smith, “the electric board have arrived and installed a new meter so now the magnets won’t work. The Earl would have her put in a home, if there were any still left open.”

Meanwhile Mad Rab’s faithful servant, the war veteran Mr Bates, has lost his DLA payments and has been forced to take a job at a car wash at a disused petrol station near the Abbey Centre. “It’s not exactly the valeting he’s used to,” says Bonneville, “but I suppose it’s a step up from wiping the hole of an aristocrat.”

The show’s change in direction has met with a mixed response from the critics. Some have hailed it as a radical shift towards genuine social commentary, other’s feel it has betrayed a much loved formula. However everyone agrees that even if it’s completely shite, it’ll be better than a Mrs Brown’s Boys Christmas Special.