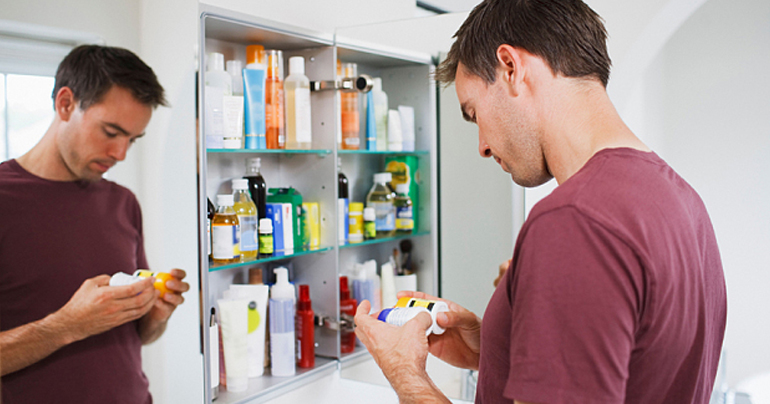 Men can’t wait to open their ‘surprise’ Christmas presents it has been revealed – as stocks of stuff other people left at their arse in the bathroom run dangerously low across the country.

“I’ve been fixing my hair with with the wife’s mousse since Halloween” admitted Newry builder, Jim Trowel. “It isn’t ‘wet look’ like the gel she bought me last year, but sure it’s pishing down here most of the time anyway, so no-one has noticed yet”

Last winter’s Lynx boxset rations ran out in mid-summer according to the Government, leaving men everywhere with the dilemma of either going to Boots to ‘buy’ stuff – or pretending to know what the ingredients on labels mean before declaring “f**k it, that’ll do!”.

“Not sure why they call it ‘hand’ soap” said Belfast man Dan Gelberry this morning. “Cos it does a quare job washing your arse and bollocks too! But the bottle is always slipping off the edge of the bath when you use the wee handpump at the top… it’s a pain in the hole! I miss being able to just dangle my stuff in the shower.”

Others agreed. “I used the last of my Christmas Lynx set in July” revealed Tyrone farmer, B O’Rankin. “Since then I’ve just been making do with stuff from under the sink. Like that fancy ‘Jeyes Fluid’ body-wash stuff herself buys. It stings your ballsack like feck… but you can’t bate the smell of freshly washed dog kennel!”

The toiletry pandemic has been spreading across the country for months now, forcing mens mag FHM to list Toilet Duck, Brillo Pads, Haze and Cif amongst the most popular mens grooming products of the year.

Not everyone agreed with the practice though.

“Yer all just a big bunch of fairies using Fairy!” complained Armagh dad, Butch Angle-Grinder. “Real men just use soap n water… and get beer for Christmas!” he added, before himself pouring a pint of Harpic.