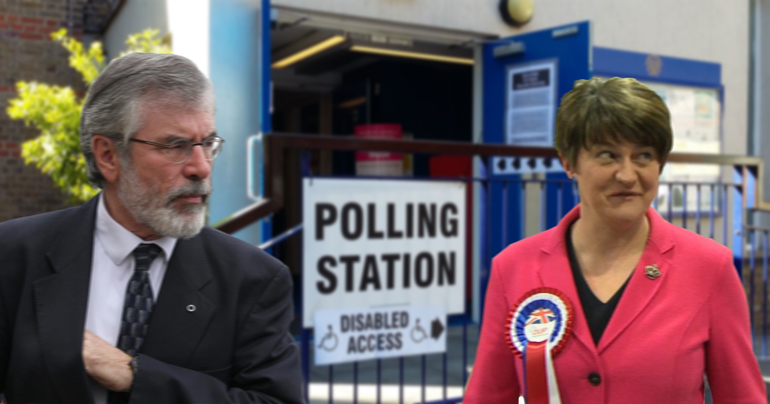 Northern Ireland’s two main parties have surprised experts by agreeing to work together to maximise their support in June’s snap General Election.

It is understood that Gerry Adams met Arlene Foster for top secret talks at an undisclosed location in Co Fermanagh. Mr Adams later denied being at the meeting although this means that it must have happened, probably twice.

As a result of the talks Mrs Foster has agreed to be as obnoxious possible towards Nationalists, while Mr Adams has assured the DUP leader that he’ll make vaguely threatening speeches and keep going on about a border poll in order to wind up Unionists.

According to seasoned political analyst Newton Hamilton, this tactic has worked before. “Sure we saw how successfully Mrs Foster got the Sinn Fein vote out in the last Assembly election,” he told us, “and the ‘Gerry-act-trick’ always works a treat for the DUP.”

“Basically this election won’t be about fancy things like health, education or even Brexit, it’ll be about counting how many of usuns and themuns there are, as usual.”

In a related story, both parties have begun frantic campaigns to get as many voters registered as possible, with observers reporting long queues of party activists outside cemeteries across the province.

“I don’t normally do elections but this one seems dead important, although at my age I’ll have to get a postal vote,” said the newly registered  Charity McAlpine, who according to her gravestone turned 142 on her last birthday.