Rory McIlroy to spend over £43 on lavish wedding 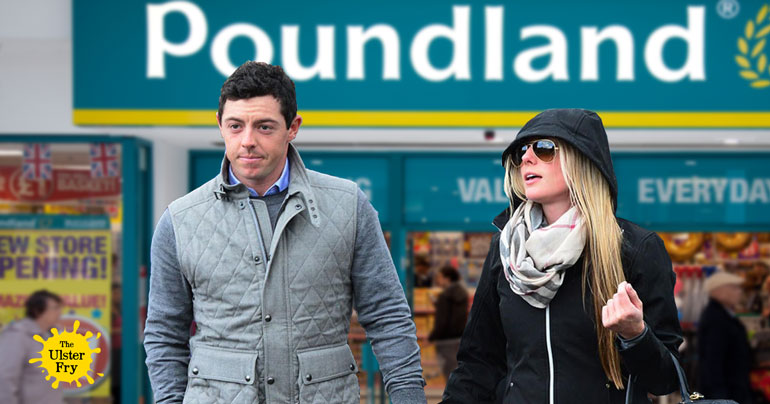 Star golf player Rory McIlroy is to blow an astonishing £43.60 on an extravagant wedding at a castle in Co. Mayo.

The superstar, who is marrying his fiancée, has told close pals that he intends to “pull out all the stops” for the ceremony. The Ulster Fry understands that the pair spent £16 in the Connswater branch of Poundland alone, mainly on plastic plates, party balloons and a ‘pre-owned’ CD of 80s hits.

“He’s really going for it,” said the megastar’s close friend, Jimmy Cricket. “He’s got a new tie and everything, although he’s gonna try and get another run out of that suit he got for his mate’s wedding 4 years ago. He’s a bit chunkier now that he’s crap at golf, but he’s gonna get it let out by his ma.”

Gigantostar McIlroy is to splurge an estimated £2.99 of his budget on an astonishing fireworks display, as close personal friend Julian Simmons explains. “He’s got one of them indoor sets from Nutts Corner, the ones that curl out stuff that looks like dog poo. Some of the guests will even get a sparkler so they can try and write rude words in the air. Only about 4 of them will get one though, he’s not made of money.”

The Tyrannostarus Rex’s wedding venue is a plush castle in County Mayo. “Me and the lads built it on the beach yesterday,” said even closer personal friend who knows him for longer than the other two personal friends we interviewed, Gloria Hunniford. “Its got 4 towers and flags made out of sticks.”

“He should be used to flags, shouldn’t he?” laughed Hunniford, “They have them in golf, don’t they? I think they do anyway.”

Rory McIlroy will be getting married at some point in the near future, we’re not sure exactly when. BYOB.