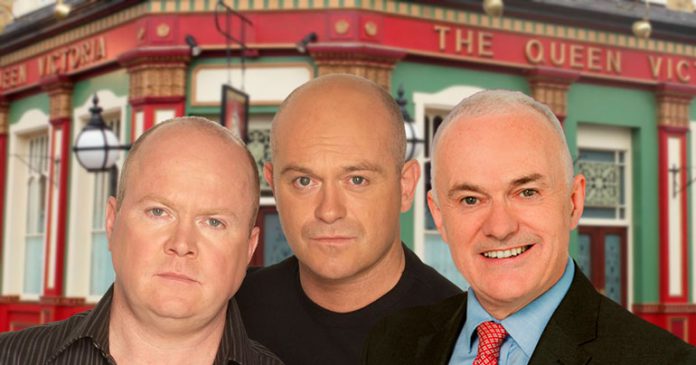 The U105 DJ will arrive in a black taxi alongside his on-screen brother Grant, who also returns to Albert Square after the two are released from the same prison.

“They share a cell for two years without realising they’re brothers, but one day in the showers Grant notices that they’ve got something in common – they each have tattoos of Peggy Mitchell’s face with the word mum scrawled below it on their left arse cheek.”

We contacted Frank for comment but he refused to confirm or deny the revelations.

“You’re avin a laugh aintchya,” he yelled at us down the phone.

“I ain’t no grass, any more of your lip and you’ll be hangin’ from meat hooks dan the Arches, you pair of pilchards,” he continued, though he did later admit to having a tattoo of Peggy Mitchell on his left arse cheek.

The Ulster Fry understands that Frank’s first major storyline will see him hunted by the Old Bill for trying to sell knock off weather watching cameras on the market, but he successfully eludes capture by hiding out in the school around the corner.