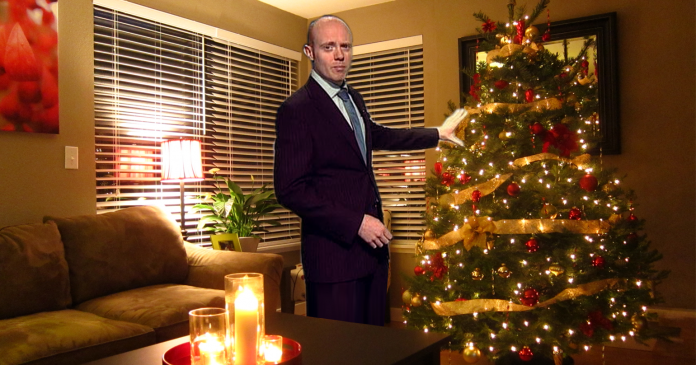 Cash strapped celebs are turning on Christmas lights for people at home, the Ulster Fry has learned, as lucrative jobs switching on public illuminations dry up.

Ruari ‘Frostbit Boy’ McSorely started the trend last year, switching on home illuminations whilst saying “You wouldn’t be long getting Tree Lit”. However other local celebrities, seemingly encouraged that no-one gave him a good boot in the hole, have now got in on the act.

“Chef Paul Rankin switched on our Christmas tree last night!” beamed local woman, Ava Caddo. “He also decorated it for us,” she explained. “however he only agreed to it after we gave him a £7.50 budget for decorations and told him he had 20 minutes to get it done!”

Others have since got in touch to share their celebrity switch on tales.

“I reached out to Jamie Dornan’s agent and asked him if he’d turn ours on.” revealed 32 year old supermarket worker, Tess Cobagg. “However he told me to wind my neck in… so we got Eoghan Quigg instead”

“He didn’t even ask for money,” she revealed. “but the wee hure drank 4 of my Harp!”

“We got the cast from UTV Live to do ours!” said local news enthusiast Anita Lyfe. “So they come on 6pm every night and follow the same pattern over-and-over.”

“Also, Paul Clarke, he stands besides the tree shuffling papers at the end of every evening before we go to bed” she added.

Police are not looking speak to Frank Mitchell in connection to several people who’ve gone missing after hiring him for their Christmas switch on – because he’s far too crafty and has an alibi.