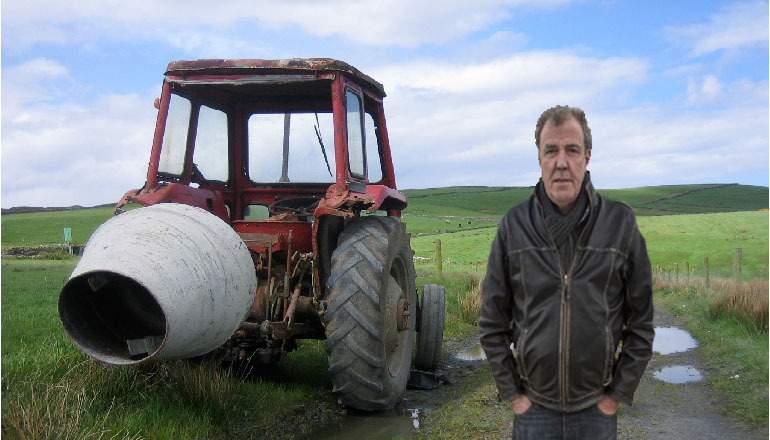 It is understood that the controversial star could soon take the reins on UTV’s Lesser Spotted Ulster, with the latter’s presenter, Joe Mahon, going the other way to join Top Gear.

Clarkson has been suspended from the programme following an altercation with a producer, but his bad boy reputation has not put off the bosses at Havelock House. “He’s rude, obnoxious, sexist, racist and regularly makes politically incorrect outbursts” said UTV Head of UTV Stuff, Rose Kneel “In a nutshell, he’s the kind of person NI people are used to regularly seeing on TV, so we thought we’d try and get him on board.”

Speaking about the move for the first time, Clarkson said “Top Gear is obviously one of the biggest TV shows in the world, but at the same time Lesser Spotted Ulster has built up a global following of its own, mainly made up of culchies and old age pensioners. During our negotiations UTV assured me they have sold the programme to over 4000 countries worldwide, so obviously there is a market for stories about farm animals in Ulster.”

It will certainly be a fresh start for Clarkson, who would be swapping his trademark ranting in high-powered sports cars for slow walks round rain sodden fields, quietly discussing weasels with Tyrone farmers.

Likewise it could be a shock to the system for Joe Mahon, who’d have to move out of his tractor filled comfort zone and start racing Ferraris down Italian mountainsides. However Mahon is no stranger to controversy himself, having once asked for a second cup of tea whilst filming a piece about hedges.

However there may be other options open to the disgraced presenter, as it is believed that Clarkson has already been mooted as a potential front-runner should the DUP opt for a change in leadership.