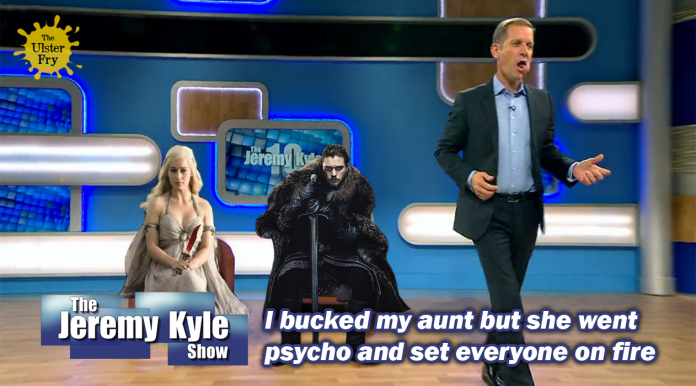 With the producers of Game of Thrones and The Jeremy Kyle Show both facing a public outcry from TV fans, ITV and HBO have sensationally joined forces to bring both shows to a satisfying conclusion.

“We’ve reshot our final episode to include the brutal demise of Jeremy Kyle” confirmed HBO spokesman, Chuck Spears. “If you loved seeing tyrants like King Joffery and Ramsey Bolton get their comeuppance – wait til you see what we’ve got in store for this heartless bastard.”

An ITV source confirmed the news. “Yeah Jeremy tries to ‘help’ Jon and Daenerys repair their relationship by loudly shouting patronising insults at them in public. However once his DNA test proves Jon is really Targaryan and his lie detector test reveals they’ve been flat out committing incest, the shit really hits the fan!”

“She launches the Iron Throne across the studio at him in a fit of rage – but he’s so tiny it goes clean over his head.”

“Much like the concept of Royal bloodlines” he added.

However some fans have speculated that Mr Kyle could actually end up sitting on the Iron Throne himself in a dramatic plot twist.

“With Littlefinger gone the show needs a new devious bastard.” explained GOT super-fan, Ted Stark. “Someone who can manipulate people, divide them and use their fear and suffering to consolidate their own position of power. And who better to do that than Jeremy Kyle?”

In other news, Donald Trump just asked someone to hold his beer.