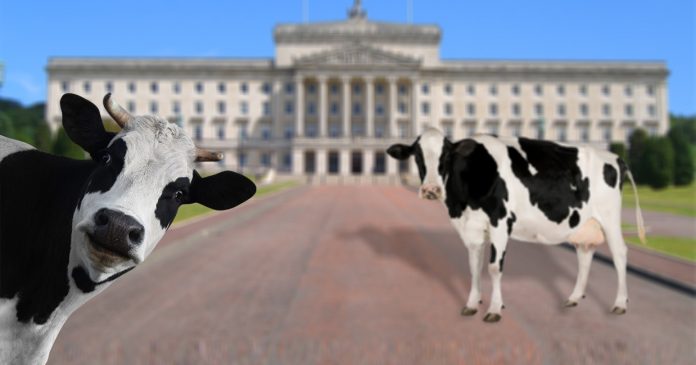 “We just don’t have enough dairy cows producing milk to splatter that many ejjits with” confirmed Dale Farm chairman, Dale Farm. “We’ve only got around 350,000 dairy cows or so, and all their milk is needed to sustain the hard working population of Northern Ireland.”

“If we start churning it up to throw at our useless politicians, we’ll be eating dry cornflakes and drinking black coffee for years.” he warned.

The news comes as a blow to local political activists, who had been hoping to produce a rake of viral videos over the coming weeks, showing NI politicians being embarrassingly clattered in cold white stuff.

“We’ve done the math and the amount of milk we need is absolutely ridiculous” confirmed Jean-Luc Placard from the NI Federation of Angry People. “Plus would mean us giving up flat whites and mocha frappuccinos.  So we’re just gonna have to pray for a blizzard… or maybe a good old fashion white wash!”

However a Stormont spokesman confirmed the RHI Inquiry had now ended and so hoping for snow in summertime was “probably their best bet”.