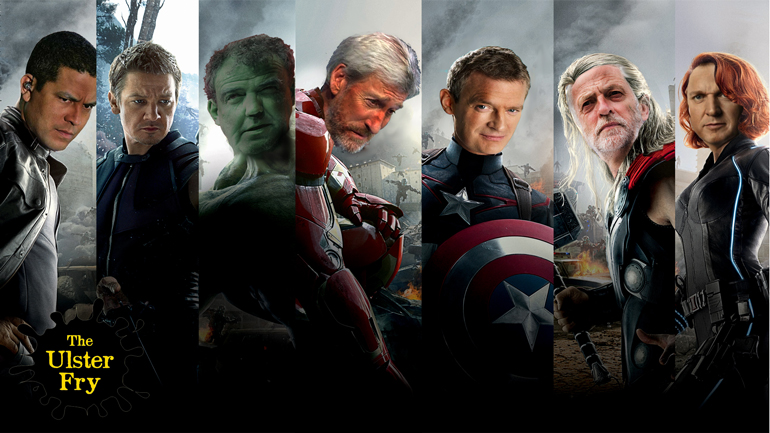 New Labour leader Jeremy Corbyn intends to bring together the world’s top Jeremys as he bids to become the next Prime Minister, the Ulster Fry has learned.

Vastly popular among ordinary Labour Party members but loathed by its MPs, Corbyn is acutely aware that if he is to ever to become Prime Minister he must build relationships with other top public figures. He has therefore turned to the “Jervengers” – a secretive sect of men called Jeremy.

Acclaimed actor Jeremy Irons, who left the organisation in 1991 to set up a home laundry service, told us that the Jerevengers were established by TV funny-man Jeremy Beadle in the 1980s, and have been secretly controlling the country for years. “Look how many top public figures are called Jeremy…” he said, “…you’ve got me, Hunt, Kyle, Paxman, Guscott – men in top positions in media, politics and sport.”

“Corbyn’s alliance will bring together some of the most powerful Jeremys in the country”, he continued. “While he may be known for his staunchly left wing views, that won’t stop him making Jeremy Clarkson his shadow Chancellor of the Exchequer. The other Jeremys call Clarkson the Incredible Hulk as he’s always flying off the handle, but let’s face facts, he’s immensely popular with the ordinary man in the street. Jeremy Kyle is a shoe-in for the Department of Work and Pensions, and I’d expect to see Jeremy Vine as shadow Home Secretary.”

More controversially, American actor Jeremy Renner is to be given British citizenship and would become Foreign Secretary should Corbyn win the next election. “That won’t please the US wing of the Jervengers, Renner is their main man,” says Irons, “and they need to counter the rise of the Donalds.”

Understandably the Conservatives will be concerned to see the Jervengers assemble in this way, but there is confusion as to how to respond. According to one highly placed source in the party George Osborne is frantically trying to build an alliance of Georges including Clooney, Michael, Ezra and Prince Baby George.

Meanwhile, London Mayor Boris Johnston is struggling to come up with a cabinet made up of Borises. We can only think of Becker, and Karloff is dead.

Don’t forget the Ulster Fryathlon is still raising money for Save the Children. Please give generously, it’s not as if you have to pay to read this crap…..