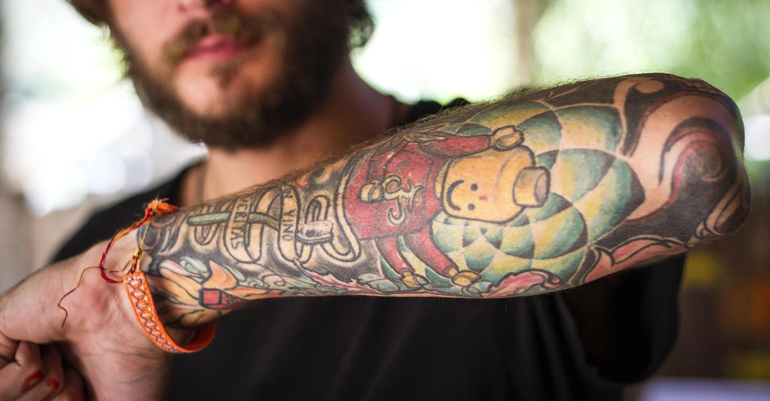 The search has begun for the last remaining Belfast man who has as yet avoided getting a tattoo. The news came to light after a social study carried out by Ballylumford University found that virtually everyone in the city, both male and female, now had some kind of body art, leading to fears that in 50 years time children will have forgotten what it’s like to have unadorned skin.

“Tattoos were once the preserve of sailors, bikers and ex-cons,” said Professor Walter Anchor of the Univiersity’s Anthropology department. “But now everyone has them, regardless of age, sex or creed. It used to be thought a disadvantage to have tatts on display in a job interview, but now you can bet at least one of the panel will have Love and Hate inked onto their knuckles. I attended one recently where the interviewer had a full face spider web, and showed me a dolphin on his arse after we shook hands.”

Professor Anchor told us that one of the most common tattoo forms he saw during the survey was the “full sleeve” of ethnic art. “Gone are the days of ‘mum and dad’ on the forearm. We know expect to see entire left arms plastered in Polynesian symbolism. It must have some deep, inner significance for people growing up in Bangor.”

The decision to hunt down the last “unillustrated man” in the city was taken after First and Deputy First Ministers Peter Robinson and Martin McGuinness revealed their tattoos at a recent press briefing. “Peter has a list of demands regarding Welfare Reform on his left thigh,” says Professor Anchor, “and Marty has ‘F**k you Peter’ etched across his chest.”

“It’s beautifully symbolic of their relationship, but made us realise that if these two had them, we had to make a move or we’ll lose touch with our natural state.”

It is understood that police using specially trained ink sniffing dogs are currently carrying out searches for the final untattoed man across the city. “We won’t shoot him or anything,” the Professor told us, “We’ll just sedate him and stick him in a glass box in the museum foyer. Then when he dies we’ll have him stuffed.”