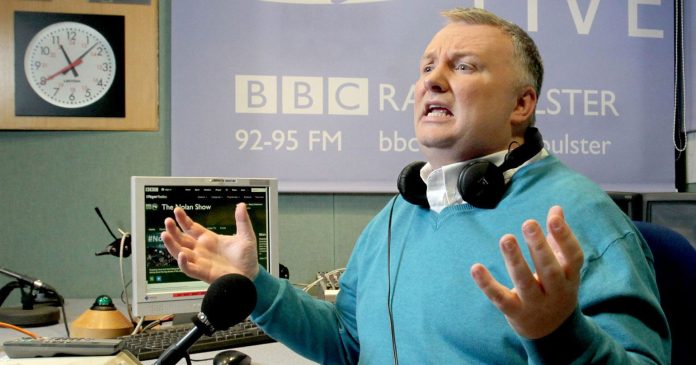 There were wild celebrations across Northern Ireland after the BBC revealed that the salary of presenter Stephen Nolan had shot up to almost £400,000 per year.

“Stephen is a high class shit stirrer, and he’s worth every penny,” said the corporation’s Head of Combat Affairs, Ray D O’Foyle.

“People in Northern Ireland are notoriously easy-going and difficult to provoke,” he continued. “Stephen provides a vital public service by inviting them onto his radio show then poking them with a stick.”

“Some people seem to think that all you need to do is wheel out Jamie Bryson every morning then open the phone lines, but there’s a lot more to it than that. Or at least that’s what Stephen tells me.”

Co Down man Kirk Cubbin told us that he was planning a socially distanced street party in his village to celebrate the news.

“It’s great to see a local boy done good,” he explained. “We’re going to get all the neighbours out, and put up controversial flags and bunting to honour the occasion. Then we’ll spend several hours arguing about it on the radio.”

We tried to contact Mr Nolan for comment but he was too busy laughing all the way to the bank.