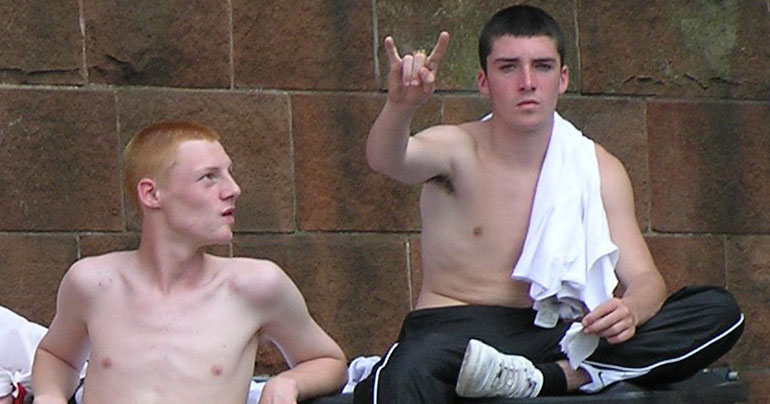 Following the news that a London receptionist was sent home from work for refusing to wear high heels, it has emerged that at least one major Northern Ireland employer is also strictly enforcing a dress code for its staff.

Barry Bluebag Jr, an assistant ball scratcher at top local firm Spides R Us turned up for an important notworking session wearing a Fila T-shirt, despite strict instructions that it was ‘taps aff’ season. He refused to remove the offending item, and was immediately sent home for failure to comply with the company dress code.

“We’ve had a clear taps policy in place since Monday,” said Gary Bluebag, Barry’s brother and head of personnel at the firm, which is Northern Ireland’s biggest importer of White Lightning cider.  “Our customers have clear standards and we expect all of our staff to uphold our proud tradition of taplessness when the sun’s out.”

Barry’s solicitor Jimmy Cash said the young man had been left ‘ashamed and devastated’ by his treatment. “My client’s duties mainly stretch to leaning against walls whilst scratching his testicles, and he feels he can perform them more than adequately whilst fully clothed from the waist up. These outdated attitudes to worker rights are tantamount to slavery and stuff like that.”

Speaking through an interpreter, a distraught Barry told us that he felt that he had a right to be treated as a valued colleague, rather than as a piece of meat.