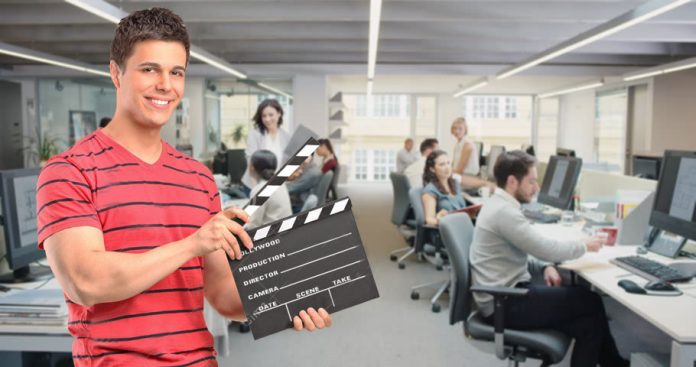 A local office worker is set to boast about a new TV show he’s started watching as if he was involved in the writing, casting and post-production process, the Ulster Fry understands.

“Yet despite my busy schedule, I still managed to produce a brand new TV series recommendation. It has an amazing cast and a great storyline – and I’ll be premiering it at the office tomorrow”

“I can’t wait to share my creative vision for where someone else’s screenwriting should go in season two.” he added, before sticking another episode on.

However at the time of going to press, his female colleague revealed she hoped to win over the office audience with a rival series – which she found on Netflix by mistake.

“I’ve dedicated years of my life to the art of lying on my hole watching TV” explained 29 year old Lauren Order. “True crime documentaries are scoring highest with my test audiences currently, including, Mickey, Hazel, Donna F and big Robert in accounts.”

“I’ve been working on this new documentary since before the beginning of this tub of ice-cream.” she continued. “The last one I was involved in recommending went on to win a BAFTA, so expectations will be sky high – but I believe this will be a ratings winner”

We asked their colleagues what they thought of James and Lauren’s plans to heavily promote two new TV shows at the office tomorrow, but no-one was really listening.