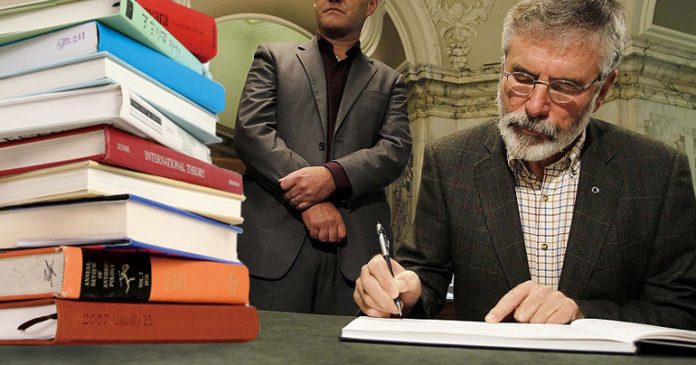 Former Sinn Fein President Gerry Adams has denied that there are any stories in the paper today about him denying IRA membership.

Mr Adams was speaking to a press conference launching The Gerry Adams Guide to Kittens, the latest book aimed at reimagining the retired politician as a cuddly eccentric who spent the entire troubles writing poetry.

“These rumours have no foundation whatsoever,” he told reporters. “My name has never appeared on the front page of a newspaper for anything other than me doing something wacky or amusing, like hugging a tree or trampolining naked with a Labrador.”

Mr Adams was then challenged by a journalist who showed him several newspapers and link on the BBC website, all of which quoted a source who claims that he had lied about his lack of an IRA past.

“Those papers are figments of your imagination,” he retorted, waving his hands in a hypnotic fashion.

In a related story, Sinn Fein have said they will be investing all the money that weird boy in England left them in his will in a new West Belfast healthcare facility.

The Gerry Adams Memory Loss Clinic will open tomorrow, if Gerry remembers where the keys are.