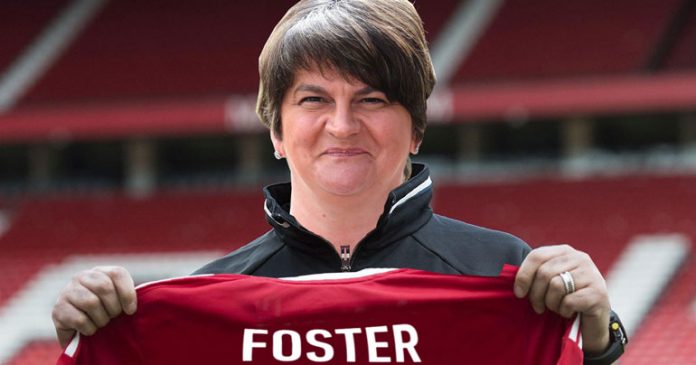 The directors of Manchester United are sensationally set to replace Jose Mourinho with the DUP’s Arlene Foster, The Ulster Fry has learned.

Following the sacking of ‘The Special One’, the club’s top brass are seeking “a safe pair of hands’ to guide the club back to the top of the Premier League, and have been impressed with Mrs Foster’s performance during the RHI crisis.

“There’s no doubt that Arlene’s got the skills to manage at Manchester United,” said a club insider. “Just look at how she was able to pass the buck at the RHI Inquiry, then forget inconvenient details.  It’s much the same in football, just blame the referee and ignore the fact you forgot to score more goals than the opposition.”

“RHI also showed that she’s more than capable of burning through vast sums of someone else’s money on a second rate scheme that lines the pockets of agents and advisers, so paying Alexis Sanchez £500k a week to sit on the bench won’t phase her.”

BBC pundit Gary Lineker agreed that Mrs Foster fits the bill. “Arlene’s well used to handling big egos, Sammy Wilson is like the Paul Pogba of politics, you either loathe him or hate him, ” he told us.

“And, just like United, she’s got no interest in being in Europe after Easter.”