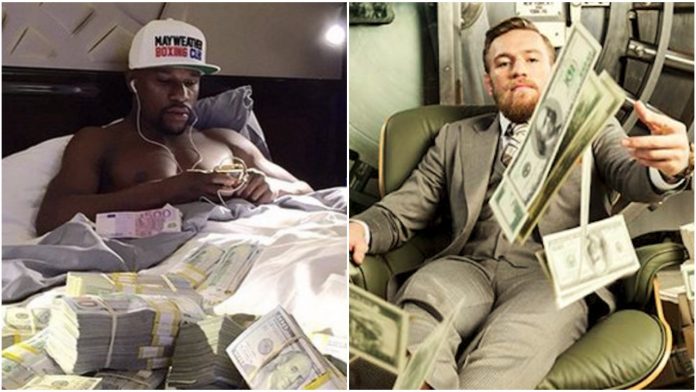 After years of turning up at star-studded events carrying massive wads of cash, Conor McGregor and Floyd Mayweather are finally set to open current accounts following their half-billion dollar bout, the Ulster Fry has learned.

“I’m sick of keeping all my dough under my mattress!” revealed Mayweather at today’s press conference. “All my celebrity pals just pay for stuff on their debit card nowadays…. but when it’s my round I’m still stuck at the bar counting out $50,000 in $20 bills for five bottles of Krystal and a lap dance!”

Whilst the pair haven’t seen eye-to-eye in the build up to the $500m super-fight, they can finally agree on something.

“Aw man I feel so stuuupid,” laughed McGregor. “I’ve been taking big bundles of money into nightclubs to pay for drinks, Champagne and dancers n that, but someone just showed me how thon ‘chip n pin’ yoke works. I feel like a right dick now tbh.”

With over a quarter billion up grabs in prize money, Ulster Bank have offered the pair a perfect compromise between banking security and their desire to carry cold hard cash everywhere.

“With Ulster Bank’s unrivaled track record in technological catastrophe and providing limited access to your funds, we are the perfect bank for keeping Mr Mayweather and McGregor’s funds safe – whilst still forcing them to queue up at their local branch to withdraw rake of cash incase our ATMs shit the bed again!” explained Ulster Bank spokesman Bob Sterling.

However in a last minute counter, a rival financial institution have offered McGregor a lucrative option to ‘go Contactless’.

“We’re giving great odds on him to not even land a punch” confirmed Paddy Power.