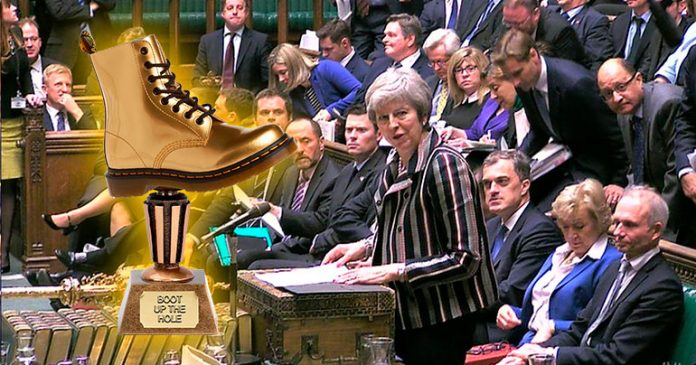 A proposal to give all MPs a massive boot up the hole has been passed by 542 votes to 3 in a special evening sitting of the House of Common People.

The decision follows another “meaningful vote” in Westminster, which could see the Brexit deadline extended long enough for us to take part in the European elections, and vote in a load of MEPs just so they can fly over to Brussels, claim expenses for a couple of weeks and then come home again.

“I’m sick of the sight of them, and if I hear the phrase ‘meaningful vote’ one more time I’ll personally travel to Westminster and boot every MP up the hole myself,” said Tonya Hoop. “What does that even mean? Have all the other votes they’ve had been meaningless up to now? WTF do we pay them for then?”

Fellow voter Jack Passage was planning to boot House of Commons speaker John Bercow up the hole. “I’m sick of him milking the attention. He’s never done roaring and guldering like he’s the deranged headmaster of Saint Ballbag’s School for Ballbags, which I suppose he is in a way.”

“He’s clearly lining himself up for a spell in that celebrity jungle yoke when he quits his job. If he does, I’ll fly to Australia and boot him up the hole there as well, right in front of Ant and Dec.”

Queues are now forming outside Westminster as members of the public arrive to administer the communal punishment to our representatives. Sammy Wilson is understood to be top of most people’s target list, followed by the DUP’s Sammy Wilson, and East Antrim MP Sammy Wilson.