Storm Gareth ‘in bother when he gets home’, confirms Mother Nature 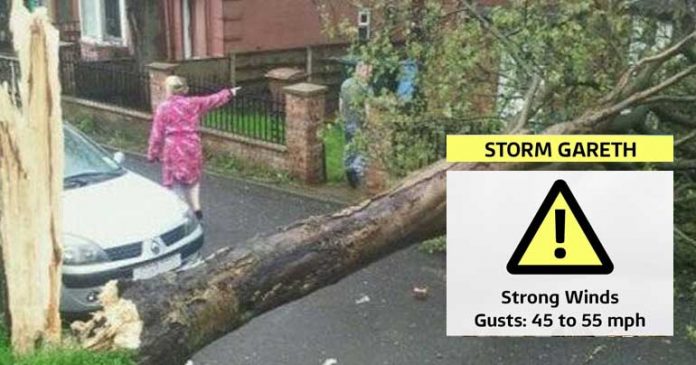 With Gareth currently causing property damage and travel chaos across the country, his mum has told the Ulster Fry that he’s grounded when he gets home.

“He was always such a good boy, I don’t where I went wrong!” a tearful Mother Nature told us. “Usually he stays in his room all day, doing his homework, playing Fortnite and occasionally wanking into oul socks… but he’s got very moody lately. He stormed out the other night in a huff because the internet went off and hasn’t been back since!”

Whist Gareth is currently causing carnage all over the country, his angry dad has assured everyone that he’ll be back to apologise, fix everyone’s fences and restore toppled wheelie bins to their upright position.

“He’ll get my toe up his hole if he doesn’t” he told us. “Me and him used to fly kites together, blow empty cans of Harp down the street and sneak into people’s back yards to dry the clothes on their line, but the wee bastard has gone clean off the rails recently.Look at the state of the place!”

However his sister Gale revealed it’s definitely drugs related. “He’s got big into blow recently” she told us. “I used to be mad into it myself, so I can see the signs a mile off.”

“There’s one coming now!” she excitedly shouted, as a bus stop blew past the window.

However in a positive turn of events, Frank Mitchell was unavailable for comment.