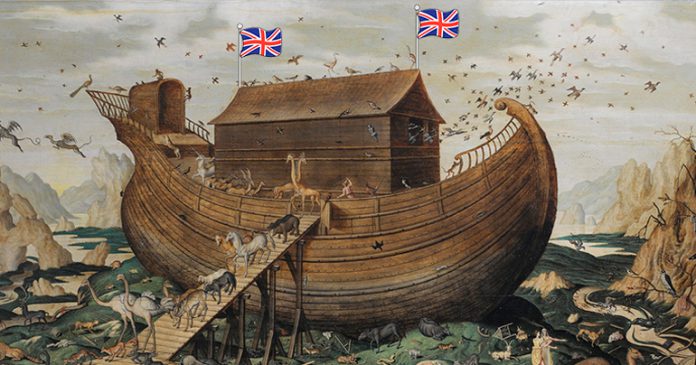 Theologians at one of Northern Ireland’s top colleges claim to have uncovered evidence that the new DUP leadership team has its origins in a biblical flood 4000 years ago.

“In the book of Genesis, we see a clear indication of things to come,” says Dr John Calvin-Klein from the University of Ballymena.

“Noah is told to bring two of every kind of animal into the Ark,” he explained. “According to an ancient Aramaic tradition, among these animals was a pair of Half-Wits, mythical beasts that resembled a cross between a Gulpin and a Hallion.”

“Recently discovered scrolls reveal that the Half-Wits soon rose to prominence aboard the Ark, taking control of the more fundamentalist animals and installing their own ministerial team of slightly strange creatures that most of us have never heard of.”

“Now, a mere 4000 years later, we can see a clear correlation with recent developments at Stormont, with a big Half-Wit appointing a junior Half-Wit to the highest office in the land.”

“If it’s in the Bible it must be true,” he told us. “I urge all schools in the province to immediately begin teaching Unintelligent Design.”

“It’s important our children learn that having no discernible skills or ability should not prevent them reaching high office.”