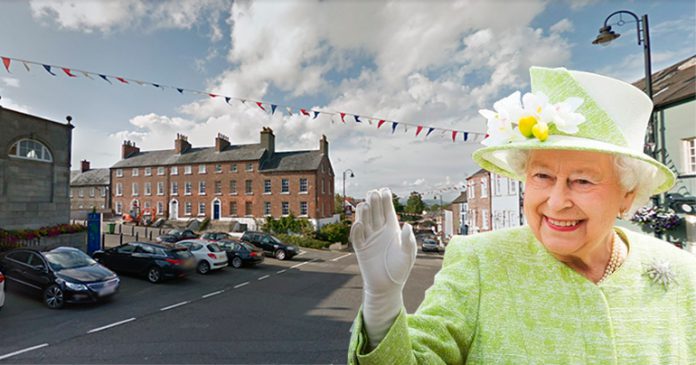 There were muted and well mannered celebrations on the street of Hillsborough today as the Queen officially declared the village to be the most Royally up its own hole place in Northern Ireland.

Speaking exclusively to The Ulster Fry, Her Majesty explained that she had been following the annual “Town most up its own hole” award with interest.

“One was most disconcerted to find that Portstewart had won last year,” she told us. “As a regular visitor to Northern Ireland, it is pretty clear to me that Hillsborough is much more up its own hole than that jumped up little seaside town.”

“By conferring the title “Royal Hillsborough” on the village one hopes to put an end to this debate once and for all, so one does”

Representatives of similarly up their own hole towns around the province have reacted furiously to the news.

“This is an unacceptable intervention by the Royal Family which cannot be allowed to influence the judges in future competitions,” said Moira Mother-of-Two, a mother of two from Moira.

“We cannot accept Hillsborough forming some kind of breakaway “superleague”, at least not unless we are allowed to join it.”

Glenarm man Glen Arme was similarly disconcerted. “What about small, up and coming, up their own hole towns like ours?”

“We dream of winning the award and qualifying for big European competitions like the Champiholes League. Hillsborough is creating a closed shop, albeit a quaint little boutique style closed shop, selling interesting artisan candles.”

No one from Hillsborough was available for comment as they were all too busy playing croquet and enjoying small triangular sandwiches in an elaborate marquee.