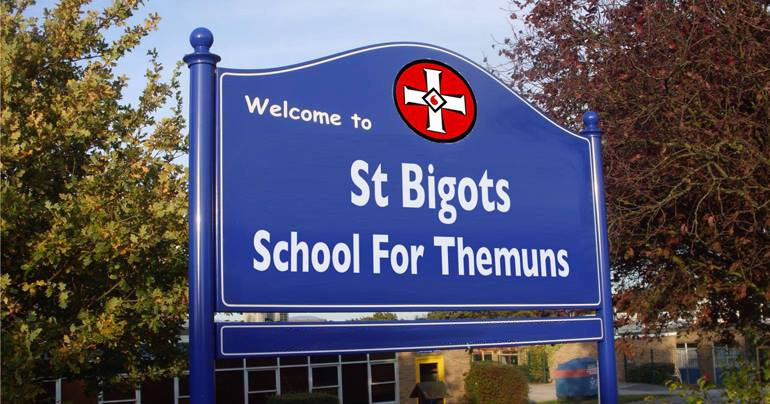 There is growing concern that school children in Northern Ireland are increasingly unable to tell whether someone is Protestant or Catholic “just by lukkin’ at them.”

A study conducted by the University of Ballywalter found that traditional skills such as “Eye Spacing” and “Way he walks” recognition have declined markedly since the Good Friday Agreement, mainly because of a lack of contact between children from the two communities.

“In the good old days we could all tell each other apart because we’d always be sent on trips together” says the report’s author, Eoin Paisley. “But chronic lack of funding for cross-community outings has meant kids rarely get the chance to exercise these invaluable skills.”

“This is compounded by the rise in naming children in a vaguely ecumenical manner,” he went on. “There’s been a huge drop in Billys, Seans, Elizabeths and Niamhs, and a surge in Jacks, Darcys, Rubens and Rhiannas.  This leads to all manner of confusion when applying traditional religious recognition techniques.”

In an effort to stem the decline, the Department of Education has announced new guidelines for primary schools that insist school year books must have adequate white space under each child’s photo to write ‘Prod’ or ‘Taig’ with a Crayola crayon.  Meanwhile younger children will be encouraged to ‘colour in’ the areas in either green or orange.

“This is just one of our many initiatives to ensure our unique un-integrated education system stays ahead of the curve of moderate thinking, and instils good old fashioned notions of segregation and division into our youngsters,” said spokesman Gus Orthem today.

“Indeed we want to test our children’s aptitude for telling ‘ussens’ from ‘themuns’ right up until they leave school,” he continued, “with final exams and a recognised qualification to show for it.”

“We’re gonna call them H Levels,” he revealed.  “Or, if you’re one of themuns, H Levels”