Stephen Nolan behind a 64% rise in violent crime, say police 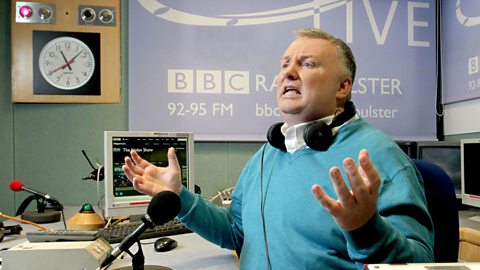 The PSNI have released shocking statistics that appear to prove that TV and radio appearances by Stephen Nolan lead to a surge in violent crime.

“There’s definitely a correlation,” says Inspector Pauly Selmet, “we see spike in attacks on the person, vandalism and arson during and immediately after one of Mr Nolan’s radio programmes. It’s even more stark after he’s been on TV, as then we’re forced to look at him and his guests.”

According to police last night’s TV show was a prime example. “We had Gregory Campbell AND Jim Allister guldering continually for about 15 minutes, even though they were sitting beside each other,” says Inspector Selmet. “That’s guaranteed to push even the most rational of people towards violence.”

“At one point the 4 panellists and Nolan himself were all shouting at once, that’s when I went to the station canteen and punched a number of constables.”

29 year old car park attendant Carl Parker told a similar story. “When they brought Shaun Ryder on as a guest I felt so sorry for him I went out and set fire to my neighbour’s shed,” he told us, “I’ll be pleading mitigating circumstances it ever goes to court.”

Forgatma Pumps, a 48 year old ballet teacher from Ballytober, told a similar story. “I listened to his radio programme by accident on Monday morning,” she explained, “then felt an overwhelming urge to hijack a train. I managed to resist, though I did ram-raid the post office in my husband’s tractor.”

Mr Nolan’s TV show is broadcast on BBC1 on Wednesdays. His radio show is every f**king day of the f**king week.