NI Tourist Board adds recycling centres to their website 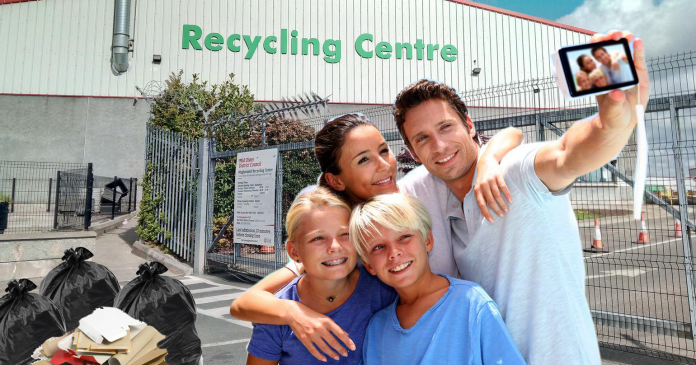 With lockdown restrictions finally easing, NI Tourist Board have announced that over 50 recycling centres will be listed as major visitor attractions on their website.

The news was met with wild celebrations as convoys of cars stuffed with cardboard, empty wine bottles and bags of rubbish beeped their horns and descended upon Northern Ireland’s hottest new places to see.

“Along with reading the Lidl magazine, going to the dump is a key part of the Northern Ireland male’s psychological make-up,” says top brain expert Sigmund Fraud.

“For weeks now, men have been staring forlornly at piles of shite in their sheds, and driving aimlessly past recycling centres in the vague hope that they might be open. It’s like Christmas has come early for them, except there’s even more crap to take to the dump.”

39 year old Carl Bored from Craigavon has been voted the NI Winner of ‘Garage Tetris’, after he successfully made room for two months worth of Amazon packaging, toy boxes and vodka bottles in his man shed.

“I’d hoped to celebrate by taking the wife and kids to the Duke Street dump,” he told us, “But there wasn’t room for them with all the shite in the car. We’ll probably have a barbecue later, then I’ll start filling the boot again.”

Fermanagh and Omagh’s Head Bin Inspector Tim Beronly told us that the council would be rolling out the red carpet at its centres. “Elton John is performing at the Kesh dump via videolink, and we have brass bands and fireworks planned for later.”

“It’s a real carnival atmosphere at our tips, if carnivals involved sorting rubbish into a variety of skips while maintaining social distance.”

However, not everyone is pleased at the news.

“We’ve spent months planning Mental Health Awareness Week,” says Stormont Chief Medical Officer Keith Medical-Officer. “We finally get it launched and suddenly everyone is down in the dumps.”