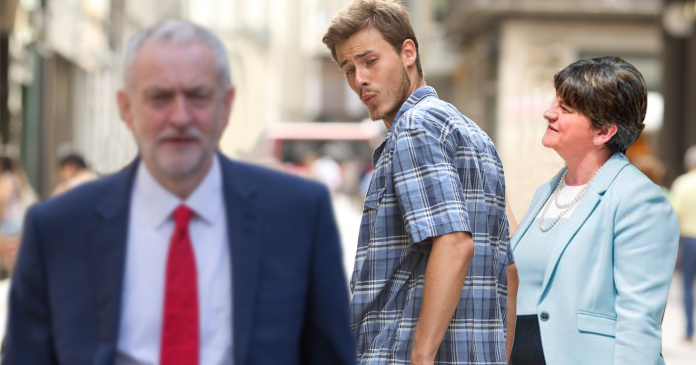 Despite months of sweet talking us, calling to our house and sliding up and down polls trying to get our attention, NI voters are more interested in English political parties – even though we can never get with them.

“Wanting what you can’t have is classic human psychology” explained dating expert, Tim Dergold. “You only have to look on Facebook to realise NI people are obsessed with Labour and the Tories even though they can’t leave them a wee ‘x’ on their ballot paper tomorrow”

The news comes as no surprise to Northern Irish voters, who admitted their head has been turned over the last few years.

“I used to be mad about local politicians!” explained Belfast woman, Anita Hero. “I’d sit up all night talking about them on the BelTel page. But now they just lay about at home and don’t even go to work. It’s such a turn off.  I’m not even angry. I’m just disappointed!”

“I’m crushing on Jeremy Corbyn instead” she continued. “He’d totally get one in the polling booth from me. If I could get my hands on him!”

Country Derry man Don Given had a slightly different take. “I used to be obsessed with giving the DUP grief. But now I have a massive hard on for the Tories instead.” he explained.

“I share all the juicy sordid gossip about them on social media – even though I or 99% of my friends can’t vote the bastards out.”

We contacted the English political parties in question for comment and they confirmed they weren’t interested in us.  “It’s not us, it’s you” said a spokesman.