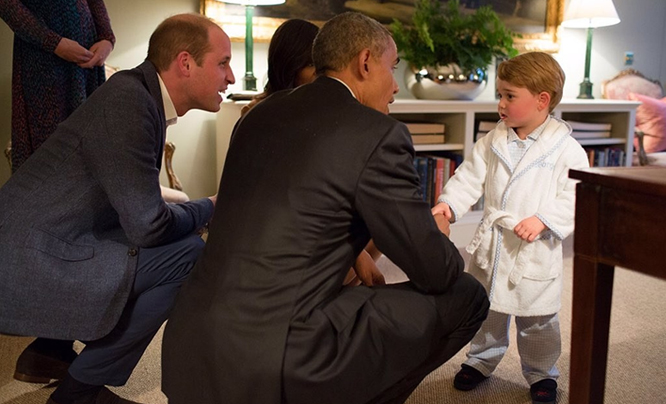 In an exclusive interview with the Ulster Fry, well known toddler Prince George has revealed that he’s fed up with wearing his granda’s old clothes and “wants to wear superhero stuff.”

The shock admission follows a series of photos showing the young prince poncing about in little shorts with matching jackets, cardigans and sailor suits. “It’s not my style at all,” he told us, “I’m not even three yet FFS, and I’m ganching about dressed like some kind of weird baby throwback to 100 years ago.”

“I’d far rather be wearing a Spider-Man outfit like my mates down at playgroup, or maybe a nice T Shirt with a dinosaur on it. I like dinosaurs, Triceratops is my favourite cos he has three horns for no apparent reason. But instead my ma is hoking through Granda Charlie’s old stuff and making me look like a right eejit.”

Prince Baby George was particularly disgruntled at appearing in his jammies with President Obama . “All the lads in the park will see it, so I’ll get quare stick on the swings. It’s OK for Charlotte, she’s a girl and they like dressing up as Princesses, but it’s different for me.”

George also told us that he was worried about his birthday in July. “Wait til you see the cut of me. She’ll probably have me dressed in  a top hat and tails and having tea with King Phillipe of Belgium. I’d far rather be down the jungle gym having a feed of Skips with the lads. Then we could all boke over each other in the ball pit and stick Lego up our noses like normal kids.”

“It’s a completed shitemare being a Prince,” he concluded, “Speaking of which, how are youse at changing nappies?”