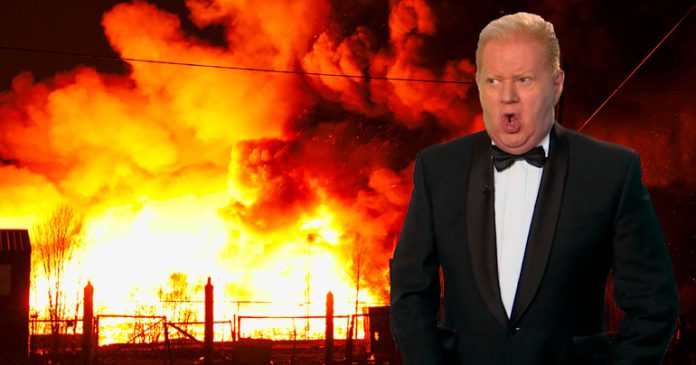 Rioting has broken out in Belfast after it emerged that long-serving UTV stalwart Julian Simmons is to be replaced by centralised ITV announcers.

The trouble began late this afternoon, when an angry mob gathered outside UTV headquarters to demand his immediate return to our screens. The situation turned violent after protesters set fire to an effigy of Frank Mitchell, chanting “Simmons in, Mitchell Out” as police brought in water cannon.

In a separate incident, several hundred pensioners chained themselves to the railings of of Belfast City Hall, with representatives saying they’ll refuse to leave until Simmons introduces an episode of Coronation Street.

The Ulster Fry understands that protests are also taking place in other major cities across Europe.

In Paris, Simmons supporters seized control of the Champs-Élysées just after 6pm, before unfurling a huge banner depicting the presenter on the Arc de Triomphe, and in London the headquarters of ITV have been blockaded by angry lorry drivers.

The crisis has also attracted the attention of US President Elect Joe Biden, who has issued a statement arguing that the replacement of the presenter is in breach of the Good Friday Agreement.

“The constitutional integrity of Julian Simmons is guaranteed under Article 6, paragraph 4, sub-section (a) of the agreement,” the statement claims. “This clearly states that there shall be no change to the continuity announcing arrangements on local television stations without the support of a clear majority of the population of Northern Ireland.”