Sammy Wilson begins cloning himself to defend the Border 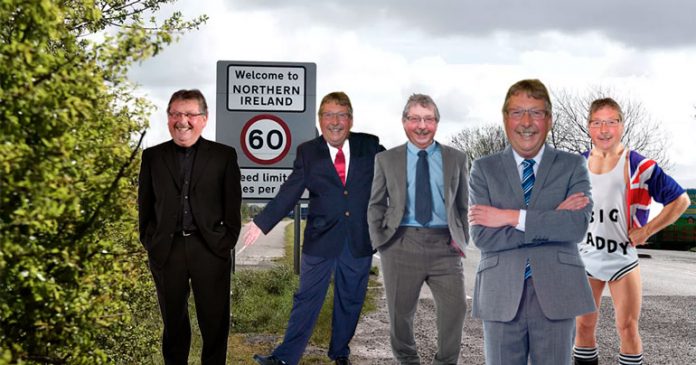 After reports of flashing orange lights and manic laughter from DUP headquarters, party SPADS confirmed last night that East Antrim MP Sammy Wilson had successfully created 16 copies of himself as part of a plan to defend the border with the Republic.

It is believed that Mr Wilson intends by produce a further 272,793 versions of himself to cover all 310 miles of the border within 2 years.

The news comes in the wake of Mr Wilson accusing PM Theresa May of betrayal on the backstop to the backstop plan. “She can stap right there an back the f*ck up,” he told us.

Wilson, 65, and the new cloned Wilsons, 1 week, addressed the press in unison today, stating only a Great Wall of Sammys could resist the barbarian horde from the Free State. “Eventually you will see eighteen 90ft tall Godzilla like versions of us, which will straddle the various main roads to act as border crossing points, with our faces turning from red to green as traffic signals,” they told reporters.

The Wilsons also confirmed they will be studying Mixed Martial Arts, Thai Boxing and Ju Jitsu, confirming this would be a “wile hard border Bai”.

The Ulster Fry understands that one in 10 of the Wilsons will be naked, but a spokesman for the MP refused to be drawn on whether these parts of the border would be hard or soft.