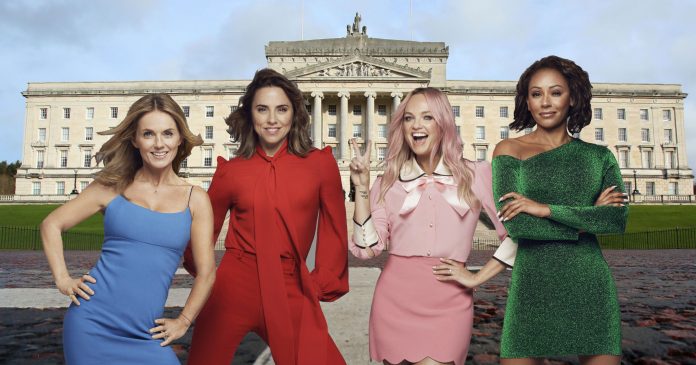 Emergency talks were held at Stormont this morning after dissident pop band The Spice Girls (TSG) released what police describe as a ‘credible warning’ that they would target Belfast if the assembly is not restored.

“We have firm evidence that TSG are capable of mounting a sustained campaign in Northern Ireland,” said a PSNI spokesman. “When they announced their ceasemusic back in 2000 they decommissioned none of the their terrorist arsenal of mid-nineties pop tracks – combined with the Westlife reunion we could be looking at a return to the darkest days of the charts.”

“The peace process faces many threats – Brexit, on-going paramilitary activity, the Nolan Show,” says BBC security correspondent Jimmy Del Argy, “but we should be in no doubt that The Spice Girls represent a clear and present danger to the stability of Northern Ireland, even without Posh Spice involved.”

Speaking before the talks, DUP leader Arlene Foster said that The Spice Girl threat would galvanise the parties. “Shit’s just got real,” she told reporters.

However experts fear that even if the parties manage to cobble together a deal it may not be enough to prevent the band unleashing their terrifying weapons of mass destruction.