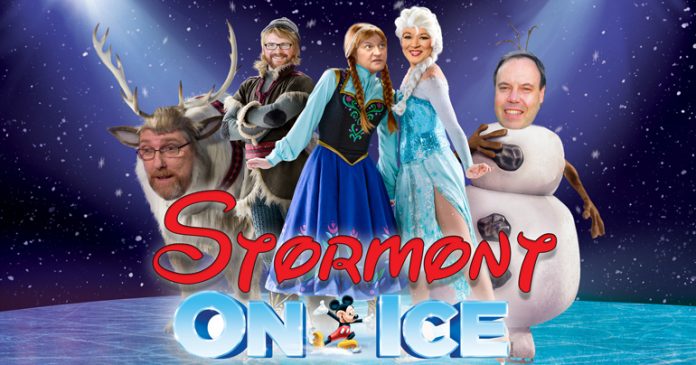 Theatre-goers and political pundits are in for a treat today as the long-running Stormont on Ice show returns for an astonishing 378th successive performance.

The show sees some of Northern Ireland’s greatest play-actors don their ice skates in what has been described by critics as ‘epic talks process in which lots of comedy characters slip about and occasionally fall on their holes.’

“There’s some great musical numbers,” says the show’s producer Nathan Ever-Happens. “We have the big hits from Frozen of course, like Let it go on, and on, and on, but we’ve also re-imagined songs from other classic musicals.”

“Michelle O’Neill gives a wonderful rendition of I could have talked all night from My Fair Lady, and Sammy Wilson’s re-working of Elton John’s Your Song from Moulin Rouge as You’re Wrong is magical.”

There’ll be plenty of opportunities for audience participation, Nathan explained.

“I’m sure everyone be on their feet dancing when we all do The Time Warp, and there’s a fantastic sing-a-long version of The Bare Necessities, which is dedicated to the National Health Service.”

“It’s the greatest show since The Sound of Stormont,” says theatre critic Veloria Kurtins, “The audiences can’t get enough of this cast, they keep bringing them back for repeat performances again, and again, and again.””

It’s like the never ending story,” says Nathan. “Which by coincidence is the title of the next show from Stormont Productions.”