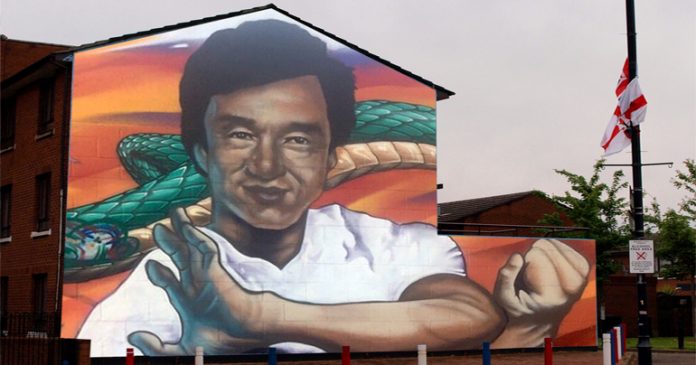 Martial Arts star Jackie Chan is the surprising new hero of Unionism after single-handedly taking on the ‘Authentic IRA’ in Neflix’s film The Foreigner.

The movie sees 63-year-old Chan star as Quan, a businessman who embarks on a mission of revenge after losing his daughter in an IRA attack.  As a result, Mr Chan is now so popular in Loyalist circles that his image has replaced King Billy on a gable end in Sandy Row.

The hero-worship hasn’t ended there, with an East Belfast flute band now named in the star’s honour.

“He’s a quare lad,” said Carson Wiliamson, the bass drummer of Ballymacarret Red Chan Defenders, “We’re even thinking of changing the words of The Sash so it becomes The Black Belt Wee Jackie Wore.”

Mr Chan is understood to be bewildered by his new found status, though he is considering moving here. “Jackie’s not sure about the whole Loyalist thing,” his agent told us, “but he has his eye on a caravan in Millisle and he might apply for a job as a community worker if there’s a grant in it.”

In a related story, dissident group Óglaigh na hÉireann have finally got round to calling a ceasefire amid rumours that Chuck Norris is thinking of coming out of retirement to film Delta Force 4 in South Armagh.

However a senior Republican source denied that the veteran star would ever side with the British. “Tiochfad Ar Norris is one of ours,” he told us.